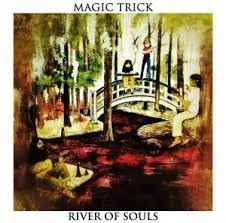 San Francisco’s Tim Cohen (also of the Fresh & Onlys) has emerged with a third release from his solo project, Magic Trick. The album was recorded in Cohen’s attic studio, dubbed the Tree House, with mixing handled by Phil Manley (Wooden Shjips, Moon Duo, the Fresh & Onlys) at Lucky Cat Studios. River of Souls is classic Tim Cohen off-the-cuff, genre-spanning pop weirdness and will see the light of day via Empty Cellar Records on December 3.
Ghettoblaster recently caught up with Cohen to discuss the release.  This is what he told us about River of Souls.
When did you begin writing the material for your most recent album?
I believe it was a brisk winter evening in Paonia two years ago. Cousin Oleg had just returned from the frontlines, we were toasting to his good fortune. Someone there had a pet ferret or mouse or something. A bit of glass got broken. I wrote a song called “Endangered Species” which was eventually kicked off the album.
What was the most difficult song to take from the initial writing stage through recording and mixing?  Why was it so troublesome?
There was nothing difficult about this album. Well maybe we should ask James. “James, what was difficult about making this last magic trick album?” “You mean, other than the fact that you never let me hear the songs before the exact moment I was to play the drums on them?” “Well, did you find it difficult?” “No.”
Which of the songs on the record is most different from your original concept for the song?
“The Store.” I originally planned for that to be in a new Walmart commercial. I was fantasizing secretly about being the hirsute spokesperson for this huge artless corporation because their sales were down. I’d saunter into the main office, dangling a compact disc from my hand, like the old days (the ‘90s) and say something like “Got your new slogan right here.” Then the song kicks in and it’s like “You’ll find it all at the store.” But now that I listen to it, I think that song is sarcastic or being a dick or something.
Did you have any guest musicians play or sing on the record?
Yes, and they are all wonderful. There’s Marc Capelle, playing horns on “My World”. There’s Steve Peacock, aka Pandiscordian Necrogenesis, ripping a one-take solo on both guitar and keys on “My World”. And there’s the inimitable Tom Heyman, playing guitar and pedal steel all over the record.
Who produced the record?  What input did that person have that changed the face of the record?
I produced it. Although I don’t really like that term “produced”. I recorded it. Me and Phil Manley mixed it. The thing that changed the face of the record the most is a new microphone I bought. It’s not a top-of-the-line microphone, it’s an EV RE20. It’s my favorite purchase.
Is there an overarching concept behind your new album that ties the record together?
Actually, there’s not an overarching concept, other than the usual Love, Death, and I suppose since that song “The Store” is on there, Taxes! Oh yeah, and lush female backup vocals.
Have you begun playing these songs live and which songs have elicited the strongest reaction from your fans?
“Crazy Teeth” got a pretty good reaction from this guy at a barbeque show in Denver. Last show, we played a bunch of the record. “My World” we jammed out pretty hard at the end. We had about ten people on stage. I’m looking into forming a band for the jam band circuit. This could be that band. I’m serious.
(Visit Cohen here: http://www.timcohen.com/.)