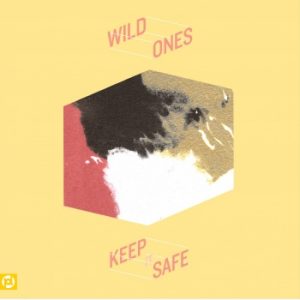 In late 2012, Wild Ones was on the verge of collapse. Guitarist Clayton Knapp had blown out an eardrum, the band’s original drummer left the group and his replacement, Seve Sheldon, was in the hospital with a punctured lung, practicing songs on a drum pad with a tube sticking out of his chest. The band’s members had funneled all of their money into a debut record, Keep It Safe, that had taken a year to write and nine months to record and mix. Fans and followers began to wonder if that record would ever see the light of day. It was make-or-break time. Wild Ones made.
Since its formation in 2010, Wild Ones has insisted on operating as a DIY collective. The band recorded and mixed its debut as a group (with help from engineer David Pollock). Sometimes considering each members’ opinion meant endless revisits and tweaks to the album’s tracks. Ghettoblaster recently caught up with keyboardist Thomas Himes and vocalist Danielle Sullivan to discuss Keep It Safe, an album that offers pop music  influenced by everything from German techno to American R&B. This is what they said about it.
When did you begin writing the material for your most recent album?
Thomas: Oh god, I don’t like to think about that – seems so long ago.  We started writing songs for this record about half way through 2011.  It was essentially when the band started.  Before then we had recorded some demos, but by no means were we a real band.  This is really our first album and our first substantial body of work.  It took a while… the next one will be quicker!
What was the most difficult song to take from the initial writing stage through recording and mixing?  Why was it so troublesome?
Thomas: “Row” was the hardest song to record.  It was one of the first songs we had written as a band and it was largely based around being energetic, dynamic, and really loud.  This didn’t translate well in the studio and we found ourselves struggling to make the recording sound like the live performance.  After wrestling with it for some time we had to realize that the studio has its own advantages as does playing live, and unfortunately you cannot make them synonymous.  So we figured it’d be best to use each medium to its advantage. For the record we ended up doing things with “Row” that we could never do live and now we play the song faster and louder at shows to exemplify what it came from originally.
Which of the songs on the record is most different from your original concept for the song?
Thomas: “Paia” started as a ridiculously long and layered song.  It was one of the last songs we wrote for the record and at that point we had all become more interested in doing more with less.  We stripped the song bare and worked through it by carving out what seemed unnecessary.  After mixing it seemed like an outsider, like it didn’t belong on the record, but now it seems to be a lot of people’s favorite track.
Did you have any guest musicians play or sing on the record?
Thomas: We had some friends play with us but nobody famous that we can name drop.  Portland’s full of really talented people who will lay down tracks in exchange for drinks and burritos.
Who produced the record?  What input did that person have that changed the face of the record?
Thomas: We’re self produced.  We worked with David Pollock of Supernatural Studios but we’ve always been very involved in the recording and mixing process.  Thanks to our bandmate Clayton Knapp we’ve amassed a legitimate amount of recording gear and we make use of it as best we can.  I think we surprise some people when we tell them we recorded everything ourselves in a practice space surrounded by metal bands.
Is there an overarching concept behind your new album that ties the record together?
Danielle: The record is about everyone I’ve loved in my life. Friends, lovers and rivals. The title Keep It Safe is about maintaining the sense of purity that comes with making music I love with my friends
Have you begun playing these songs live and which songs have elicited the strongest reaction from your fans?
Danielle: We have been playing these songs live for several months now, on tour and at home. The song that elicits the strongest reaction at shows is “Paia”. That interests me because it’s the only love song I’ve ever written. It is my very favorite to perform and I know that comes through for the audience.
(You can watch a music video and hear the album here via SoundCloud. http://wildonestheband.tumblr.com/keepitsafe.html.)