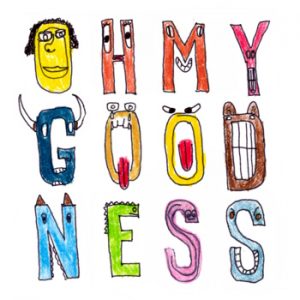 Oh My Goodness are a musical duo consisting of multi-instrumentalists and producers Therese Workman and Tyler Wood. Both originally from Maine, and now based in Brooklyn, NY, the duo met as Harvard freshmen assigned to clean the same dorm bathrooms for their summer jobs. Oh My Goodness’s musical style has been described as experimental hip-hop, funk, pop, soul, and “avant-indie” by some and as “feral Huxtable children” by others.
Their debut self-titled EP was released on May 28, 2013. The music video for their single “OMG OMG” was directed by award-winning Pachinko Pictures, and employed modified slit-scan photography and animation techniques. A remix album will be released in Fall 2013.
Ghettoblaster recently caught up with Workman and Wood to discuss the EP.  This is what they had to say about it.
When did you begin writing the material for your most recent EP?
Workman: The writing in this EP spans from 1998 to as recently as up to a couple weeks before mastering this year. Some of the lyrics and compositions had been lingering on broken prototype laptops and old Myspace accounts. When Tyler and I first reunited and decided to become a band in 2010, we went through my collection of existing songs and his archive of beats to pick the tracks that we wanted to work on first.
What was the most difficult song to take from the initial writing stage through recording and mixing?  Why was it so troublesome?
Workman: In my opinion, I think maybe “Everything All”—and just because there’s such a variety of different types of things going on, including a pretty 50/50 electronic/live performance ratio. Also, with anything that is electronic/digital, having infinite possibilities can be crippling.
Wood:  Yes, “Everything All”!  One of our rules in making the EP was that we didn’t want to have to clear any samples.  So the few samples that were on the demo versions were replaced.  “Everything All” had a drum sample that COMPLETELY defined the feel of the song, and would require careful attention when recording the replacement.  We ended up deciding on empty trash barrels to rerecord the drum part, and this involved several hours of disgusting cleaning in my backyard before we could even think about recording them.

Which of the songs on the record is most different from your original concept for the song?
Workman: I would have to say that the raging outro in “Money” was definitely an unexpected interpretation. In the demo version, “Money” sort of sailed out in a little head-bobbing, R and B groove, which definitely expressed a different sentiment.
Wood:  For me, “Rogue”, mostly since it was the only one that was my original concept.  It was originally a hip hop beat that was centered around a sample of an sitar and tabla.  My beat was built up around that sample and eventually the sample disappeared.  It then sat on a zip disk for years, and I unearthed it to give Therese when we began talking about recording together.  She took what was a seed of an idea and transformed it into a true song.  It blew my mind, and we began a back and forth over the internet (Therese was in Maine still).  It was incredibly exciting.
Did you have any guest musicians play or sing on the record?
Workman: Do loud crickets count? Tyler and I did it all ourselves.
Who produced the record?  What input did that person have that changed the face of the record?
Workman: Us again.
Is there an overarching concept behind your EP that ties the record together?
Workman: We initially treated this EP like our demo, or introduction to the world. So we wanted to pick six tracks that would illustrate what we’re interested in and what we’re about. I think instead of going into the process with a concept, we discovered at the end that there were definitely some themes, which included fun and being worry-core.
Wood:  Yes, worry-core!  that’s the concept.  Done.
Have you begun playing these songs live and which songs have elicited the strongest reaction from your fans?
Workman: Our live show is REALLY fun for us because we get to be acrobatic multitaskers, both responsible for various instruments.  Tyler’s replaced one of the toms on his drumkit with a synth, and I’ve got a couple of stacked keyboards and a floor tom. We love trying out new formulas to translate the full EP sound to the live experience. My favorite audience reaction when we’re playing live is when people hear the synth tom fill in “Everything All” for the very first time. Always a party.
Wood:  Agreed!  Also the intro of “I’m a Big Rockstar”  (unreleased!!)  also causes instant whooping and hollering.   And of course “OMG OMG” now that everyone’s learned the hook:)   Our two-piece setup does seem to bring a surprising amount of energy to the table, in no small part because we are always hanging on by a thread and I think the audience can feel that urgency!
(Visit the band here:
www.ohmygoodnessmusic.com
www.facebook.com/OhMyGoodnessMusic)