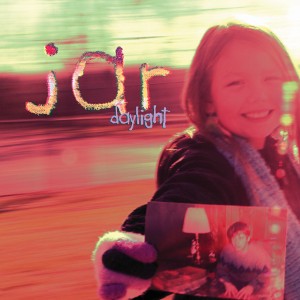 Jarringly heavy and delicately emotional, Doylestown, Pennsylvania’s Daylight has spent the past few years honing their brooding, grooving sound across several EPs.  In 2008, friends Taylor Madison (vocals/guitar), Joe Kane (bass) and Jake Clarke (vocals/guitar) began writing songs calling on ‘90s grunge and punk influences all while adding their own dark vibe.
That vibe is ever present in the band’s Jar, which is delivered with haunting sincerity.  Naturally, Ghettoblaster had to find out more about what is sure to be one of our favorite LPs of the year.  This is what Taylor Madison had to say about the record, which arrives via Run For Cover on April 30…
When did you begin writing the material for your most recent album?
We started writing right around the time Zack joined the band, which was sometime in January of 2012.
What was the most difficult song to take from the initial writing stage through recording and mixing?  Why was it so troublesome?
I can only speak personally, but for me it was “Hole In The Ground.” I had the song written for a few months, but we had never really played it together until we actually went to record it. The song is kind of different than any other song we’ve ever written. I think the hardest part was recording the vocals because the song makes me so emotional. All of our songs do, but that song is about my mother, and I still get upset when I hear it.
Which of the songs on the record is most different from your original concept for the song?
Definitely “Around The Railing.” I think it was one of the early ideas I brought to practice when writing for the record and everyone HATED it. It had this really heavy, chuggy main riff that sounded like it should be in a Kyuss song, or something. We ended up changing the song like four different times until we got the version that we eventually recorded. I’m much happier with it now, but I still like the original “Kyuss” riff too.
Did you have any guest musicians play or sing on the record?
The only people who play on the record that aren’t in the band are Will Yip (doing a few additional percussion parts) and Shelly Weiss, who recorded the strings in “Hole In The Ground.”
Who produced the record?  What input did that person have that changed the face of the record?
Our friend, Will Yip produced the record. I’d say the easiest way to explain Will’s input on the record would be to say that he brings the songs to life. We showed up with 14 songs, that were fully written (save for a few lyrics here and there), decent songs that we were all happy with, and Will’s input brought those songs to their full potential. He is honestly a genius. We would describe the way we wanted something to sound, and he knew exactly how to achieve that sound, no matter what it was.
Is there an overarching concept behind your new album that ties the record together?
Yeah. A lot of the songs I wrote on the record are about my family, and the things we’ve been through in the past year or so. My step father passed away last fall and it obviously had a pretty profound effect on me and my family. So, the majority of the record revolves around that. Even the name Jar is in reference to my step father being cremated.
Have you begun playing these songs live and which songs have elicited the strongest reaction from your fans?
Right now we only play two songs off the record in our set. After the actual release date we will play more.  We just didn’t want to bombard people with all new stuff the second they heard it. As far as which tracks have drawn the biggest reaction, it’s really hard to say. A lot of people seem to be into different songs for different reasons, and I think that’s so cool.