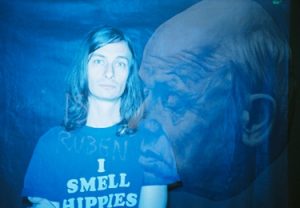 This summer T. Hardy Morris (who is also the frontman of Dead Confederate) will hit the road in support of Audition Tapes, his debut solo album.  The album drops on July 30 on Dangerbird Records. Recorded at Playground Sound studios with Cosmic Thug production team (Justin Collins and Adam Landry), the sessions came to be with the help of several in Morris’ talented group of friends, including appearances by members of Delta Spirit, Black Lips, The Whigs, etc.
Audition Tapes finds Morris abundantly inspired, oftentimes invoking the grand spirits of Elliot Smtih, Alex Chilton or fellow Georgian Vic Chesnutt. On songs such as “Quit Diggin,” “Hard Stuff” and especially the gorgeous title track, listeners are treated to intimate, fragile performances, so informal that we are invited to hear creaks and count-offs, finger taps on guitar strings and other warm and extraneous studio noise.
Ghettoblaster recently caught up with Morris to discuss the ambitious project.  This is what he said about it…
When did you begin writing the material for your most recent LP?
Right after my honeymoon a couple of years ago. My new bride and I didn’t have much money for a trip, but I had been asked to open solo for the band Bad Books so we made that tour our honeymoon. Very romantic. I hadn’t played solo very often at that point, so I was just doing a few back pocket songs and Dead Confederate songs. The shows went fine, but I wasn’t totally happy so I started writing some more stripped down songs with that “solo” vibe in mind.”
What was the most difficult song to take from the initial writing stage through recording and mixing?  Why was it so troublesome?
“OK Corral” I think. We played with the rhythm of that one a lot. We couldn’t decide if it should be slow or have the country beat. Both worked, but we went with slow in the end and I am glad we did.
Which of the songs on the record is most different from your original concept for the song?
“Audition Tapes” wound up different than I thought it would be, but I really didn’t have strong opinions on them to begin with. I was down with playing with them and seeing where they wound up.
Did you have any guest musicians play or sing on the record?
Yes. Lots of people. Most noteably I guess would be Matt Vasquez of Delta Spirit, Ian St Pe of Black Lips / my fellow Diamond Rug, and Julian Dorio of the Whigs. Julian played drums on most of the album.

Who produced the record?  What input did that person have that changed the face of the record?
Adam Landry and Justin Collins (aka Cosmic Thug).  They had a lot of influence on the record, their little studio rules and they have great taste and great ideas. Loved working with those two.
Is there an overarching concept behind your new album that ties the record together?
I didn’t really discover the theme until we were several songs into recording… I realized that the songs were all about my youth, my hometown, my old friends and the stuff we did as kids. That weird window of time when you’re like 13-15 and you’re ready to get out and go but you can’t drive yet (legally). Those were fun times for me and I like that version of me so I guess I had been revisiting that time while I was writing these songs. Like I said, I didn’t realize it but the theme happened and it was a cool realization.
Have you begun playing these songs live and which songs have elicited the strongest reaction from your fans?
Yeah, we play with just a 3-piece a good bit (myself, pedal steel & keys) and I like that vibe. We have done full band too and it’s great, we just need to find time to rehearse. People always seem to like “Beauty Rest” when we play live.. And that works out good cause we always play it last anyway.
(Catch T. Hardy Morris on tour this Summer.  Dates below:
* w/ Patterson Hood & The Downtown Rumblers
MAY
05 – Atlanta, GA – Shaky Knees Festival (1:15 pm at North Ave. Stage)
JUNE
08 – Franklin, TN – Franklin Theatre *
09 – Newport, KY – Southgate House Revival *
11 – Evanston, IL – The Space *
12 – Ann Arbor, MI – The Ark *
13 – Cleveland, OH – Beachland Ballroom *
14 – Ithaca, NY – The Haunt *
18 – Annapolis, MD – Rams Head On Stage *
19 – Virginia Beach, VA – The Jewish Mother *
JULY
19 – Santa Monica, CA – McCabe’s *
20 – Santa Monica, CA – McCabe’s *
AUGUST
01 – New York, NY – Communion Nights)