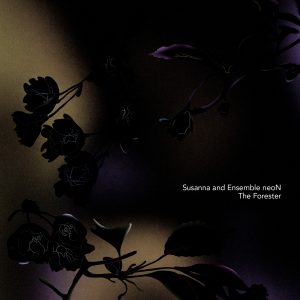 Active for more than a decade through eight albums released under the names Susanna and the Magical Orchestra, Susanna, and Susanna Wallumrød, Norwegian songstress Susanna has recently been taking great steps towards more independence and autonomy, while increasing the range of her considerable talents as a songwriter, vocal interpreter and producer. She’s known for both her own songwriting and her huge range of highly personal interpretations of other people’s songs, including Dolly Parton, Leonard Cohen, Prince, Joy Division, Scott Walker, KISS, amongst others. She is an intensely arresting performer; holding audiences captive with her hypnotizing vocal timbre and the powerful, all consuming sound of her band.
Susanna’s first new, full-length release on her own label, The Forester, is a co-production with the Norwegian contemporary music group, Ensemble neoN. It combines the antique notes of the Baroque theorbo, woodwinds and strings, and Susanna’s sparse piano, and features Susanna’s strongest songwriting to date.
Ghettoblaster recently caught up with her to discuss the new album, which was released on her own label, SusannaSonata, this week.  This is what she told us about it.
When did you begin writing the material for your most recent album?
The songs on this The Forester release were written over a very long period of time. When the leaders of Ensemble neoN approached me with the idea of a collaboration, they got to choose between released and newly-written material. Time has passed since the arrangements were made and we played the very first, and nearly only, concert with this music. It has taken time to find the money to record and finish the album, so by now, all the songs are released in other versions and albums.

What was the most difficult song to take from the initial writing stage through recording and mixing?  Why was it so troublesome?
Each song has its own history and process. The song that has changed the most is the title track “The Forester”, but I wouldn’t say it has been a troublesome process- rather quite interesting, with two composers writing new arrangements for the song, and even adding parts to it. I guess the most challenging part was rehearsing the piece, and to make sure to come to together in the performance of the song.

Which of the songs on the record is most different from your original concept for the song?
That would have to be “Lonely Heart”. I very much like this new version of the song.

Did you have any guest musicians play or sing on the record?
This album is done together with the contemporary music ensemble neoN, so there is a lot of guest musicians in the album compared to what I usually do. Extremely talented musicians, putting a lot of their musicality into the album and the performances is what makes the album special.

Who produced the record?  What input did that person have that changed the face of the record?
I produced the record together with the Norwegian producer Deathprod. We have done many collaborations together, and I have learned a lot from these collaborations. It’s always good to have a second pair of ears and someone to guide and come with input in the recording. Deathprod has a unique way of always seeking the core of the music, some kind of true intention, which I like a lot.

Have you begun playing these songs live and which songs have elicited the strongest reaction from your fans?
Yes, since the songs were made a while ago I have played them a lot, in different settings and formats. They all bring out different reactions, many like “Oh, I Am Stuck” in concert.
(Visit Susanna here: http://susannamagical.com/.)