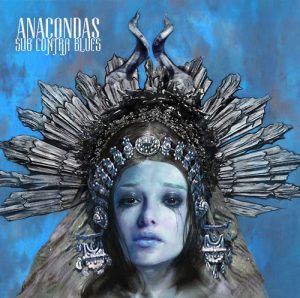 Fans of huge riffs, provoking resonant passages and driving rhythms are bound to rejoice when Brighton trio Anacondas releases their debut album, Sub Contra Blues, via Prosthetic Records on October 15. The group, originally formed in 2010 from the ashes of the acclaimed English metallic hardcore group Johnny Truant draws influence from bands such as Cave-In, Pelican, Alice In Chains and Meshuggah, yet they maintain a distinctly British edge, which is reminiscent of a post-metal Swervedriver.  They are dense and progressively sludge driven, balancing immense heaviness and delicate melody in equal measure.
The power trio, whom share vocal duties, features former Johnny Truant members/brothers Stuart Hunter (guitars) and James Hunter (bass) along with the addition of Tim Newman on drums. Ghettoblaster recently caught up with the brothers to discuss the record and this is what they told us.

Stuart: As soon as Anacondas was conceived we began writing with the first tracks being “You Set The Moon on Fire” and “River”, all the way through to “This Night Will Last Forever”, which was written about a week before heading into the studio to begin recording Sub Contra.

What was the most difficult song to take from the initial writing stage through recording and mixing?  Why was it so troublesome?
Stuart: They were all pretty troublesome in their own individual ways. Each song has a slightly different feel about it and with that its own separate issues. But, if I had to chose the track that produced the most ball-ache for everyone, then that track would be “The Witches”.
Which of the songs on the record is most different from your original concept for the song?
Stuart: The songs stayed much the same as we wanted to keep the record as organic as possible.
Did you have any guest musicians play or sing on the record?
Stuart: Dee Baxter sings on “Simianimal” and ” The Witches”.  Although all three of us share vocal duties on the album, we wanted to had the element of a female voice.

Who produced the record?  What input did that person have that changed the face of the record?
James: We didn’t have a dedicated producer on board, but we had the help from in-house engineers working with us. In a sense, we produced it ourselves with Paul Win-Stanley mixing the record and Russ Russell mastering it. But everybody that worked with us ultimately helped shape the final outcome.
Is there an overarching concept behind your new album that ties the record together?

James: We wanted the album to flow, taking the listener on a journey and back again life, love, loss, death and rebirth.
Have you begun playing these songs live and which songs have elicited the strongest reaction from your fans?
James: We have been playing a few of these songs live for a while now.  “High Horse” seems to get people pumped; it’s fun, heavy and energetic for us anyway.