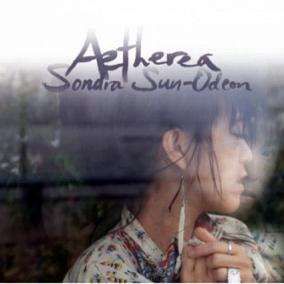 New Yorker Sondra Sun-Odeon released her debut album, Ætherea, in December, which was a departure from her previous collaborations as one-half of the dark psych band Silver Summit.  Ætherea is a much more personal affair that soars through the ethereal, then dives, into moments of anxious yet delicate noise.  Her haunting voice carefully navigates the delicate guitars and intertwined strings.  There are moments when her pastoral melodies are infused with the explorations reminiscent in psych music and in a live setting some of her songs morph into much heavier songs (especially when playing with a full electric band).
Ghettoblaster recently caught up with Sondra to discuss the recor, which will be released on vinyl in February via Sun Ode Recordings.  This is what she said about it…
When did you begin writing the material for your debut album?
Most of these songs, I wrote back in 2008, until 2010. “Paradise” was a sort of elegy for both my grandmothers having passed away within a few months of each other in 2008…the Silver Summit album came out soon after… and after touring the west coast and shows with Wovenhand, I was writing songs that were mellower and that were deemed maybe too mellow for the direction Silver Summit was headed. So I started playing these out live, solo.
What was the most difficult song to take from the initial writing stage through recording and mixing?  Why was it so troublesome?
I would say “Lady in the Woods” was the most work and perhaps demanded the most attention (I wouldn’t say “troublesome”). I had been playing all of these songs live, and very sparsely, as I was usually playing solo live. But in the studio, “Lady” became a very lush, story-telling kind of song…with gorgeous string arrangements.  It really became larger than life and it grew beyond any vision I had of it in the beginning. So, we had to really get the right treatment of the guitar and voices to step up to where everything else was…everything had to support each other and tell a cohesive story, sonically, and that story had been elevated to a rather high place. So that was challenging. After almost an entire year of working on this album (“Lady” was the last song we finished mixing on) with Jeff (Cook), I was really dying to be done with this song, the entire album and just get the hell out of there.
Which of the songs on the record is most different from your original concept for the song?
“Belonging.”
Did you have any guest musicians play or sing on the record?
Yes, Helena Espvall played cello and effected cello, and she improvised some of the most incredibly beautiful complements to my music a writer could ask for. Leyna Marika Papach arranged violin/viola parts for several songs and I am indebted to her vision as a composer.
Who produced the record?  What input did that person have that changed the face of the record?
Jeff Cook co-produced the record with me. He had a great deal of input. We were basically partners in creating this work, which I think of as our baby, over the course of the year, 2011. He put a lot of love into this work. I trusted his expertise in the sonic spaces we needed to maneuver and his help with string arrangements was invaluable. His work on it really helped me elevate my very, very humble idea of just doing a quick demo of these songs, into something much grander and beyond any original vision I’d had of this project.
Is there an overarching concept behind your new album that ties the record together?
Not really, but there are definitely recurring themes throughout my lyrics—love/paradise lost….yearning….abandon…living in the now and in what precious little time we’ve got. You know, Life.
Have you begun playing these songs live and which songs have elicited the strongest reaction from your fans?
Yes, I’ve been playing these songs, as well as newer ones, with a full band since the album was finished.  I’m not sure which songs fans react to most.  I guess you’ll have to ask them.
(Check out the wistful “Golden Bird” here:  https://soundcloud.com/wearesolidgold/sondra-sun-odeon-golden-bird.)