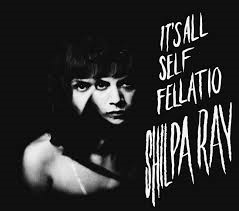 Shilpa Ray’s new EP, It’s All Self-Fellatio, was just released on Nick Cave’s own label, Bad Seeds Ltd.  record label.  It’s the follow up to her last full-length Teenage And Torture, and proceeds her next LP Last Year’s Savage, due for release in 2014.
Shilpa Ray is one of the most unique artists around, and not just because she plays the harmonium.  Her music has been said to embody the energy of “a dog biting an electric fence” (Village Voice), and her vocals are without match in their strength and delivery.  Like Janice Joplin channeling Howlin’ Wolf.  But I’m guessing Mr. Cave’s endorsement might hold more weight with readers than mine does…
Ghettoblaster recently caught up with Ray to discuss the EP.  This is what she said about it.
When did you begin writing the material for your most recent EP?
Around May 2013. I was on a very strict deadline and had just gotten off tour with Nick Cave and the Bad Seeds. They had me singing backing vocals for their North American tour. On the second day of tour, Nick asked me to record an EP to release for the UK/Europe Tour in the fall.  I had just finished writing an album, so the idea of having to write four new songs freaked me out. I’m not one of those prolific genius types. I actually have to work at something for long periods of time to get it right. I basically became a shut in all Summer.
What was the most difficult song to take from the initial writing stage through recording and mixing?  Why was it so troublesome?
None of them. I had become so immersed in these songs that recording and mixing was a breeze. I had already mapped out the parts and was determined to record them live. I organized the scheduling and the sounds I wanted with Mark Ospovat of Emandee Recording. We had already been working together for two years so our communication was like a healthy marriage. I also cut myself off from anyone I knew who would be a distraction to the process. No one got rough mixes or a preview of the recordings before they were mastered. There was no time for bull shit basically.
I made my band practice a lot, so by the time we got to the studio we pretty much recorded everything in 1 or 2 takes. We recorded everything including overdubs, and mixing in 3 and a half days.
Which of the songs on the record is most different from your original concept for the song?
None. This sounds exactly the way I want it too.  When we get to talking about the full length record I can definitely shed light on making mistakes. With this EP I finally figured out the order of things. My artistic process. It took me such a long time to have the confidence to stop listening to everybody and listen to myself.

Did you have any guest musicians play or sing on the record?
Andrew Hoepfner of Give to Light/Darwin Deez did backing vocals. He’s my go to guy. He’s a harmony machine.
Who produced the record?  What input did that person have that changed the face of the record?
It was me and Mark Ospovat we work as a team. He captures very dark and dense sounds. Amazing drum sounds and vocals sounds. We record onto tape. I dig working with him cause we both love raw unedited recordings. I’ll take feel and simplicity over the cut and paste method any day.
Is there an overarching concept behind your new EP that ties the record together?
Most of the songs were inspired by hysteria on the internet, except for “Lesson From Lorena”, which was inspired by Lorena Bobbit. There is a lot of violence in the lyrics to this EP.
Have you begun playing these songs live and which songs have elicited the strongest reaction from your fans?
Everyone has a different response. Everyone’s got their favorite song. It’s been a mixed bag. I love and hate all my children equally. Nick’s favorites are “Lesson From Lorena” and “I Is What I Is”. He digs ballads. He writes pretty epic ones himself, you know.