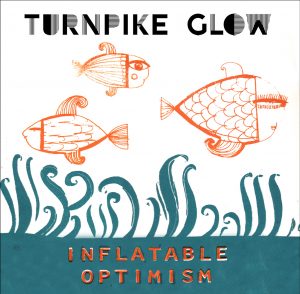 UK-based outfit Turnpike Glow writes big, catchy songs with new wave and pop hooks that draw back to musical influences from ‘90s staples such as Pavement and more recent heavies like Phoenix.  The group’s four-song debut EP (which was mixed by Dave Newfeld who did records with Broken Social Scene and Los Campesinos!), Inflatable Optimism, delivers these wondrous elements all in one tight package.
The record hits shelves January 2013 for the first time.  Ghettoblaster caught up with Sandro Schiena to discuss the release and this is what he said about it…

When did you begin writing the material for your most recent EP?
The four songs that ended up on our debut EP were all written over the last two to three years. They’re the ones that made the cut, so to speak.
What was the most difficult song to take from the initial writing stage through recording and mixing?  Why was it so troublesome?
I would probably say “The Turn, The Pike and The Glow.” We had all the melodic parts down but it took us a while to make the different sections flow together.
Which of the songs on the record is most different from your original concept for the song?
“Marie” was a completely different track when we first came up with it. It almost had a “soul” vibe to it and the drumming was a lot more straight forward. Then we starting toying around with the stylophone and some deviant synth sounds and everything went into a much groovier direction.
Did you have any guest musicians play or sing on the record?
Celine Dion asked us to sing on a couple of tracks but we said “no, thanks.”
Who produced the record?  What input did that person have that changed the face of the record?
All the tunes were mixed by Dave Newfeld, producer of Broken Social Scene’s first two albums. His production work added an extra “oomph” to the tracks, with a little bit of gentle distortion and some multi-layered delight.
Is there an overarching concept behind your new album that ties the record together?
Nothing intentional, but all tracks have an uplifting and upbeat vibe which seems to tie everything together. Metronomy and Phoenix were on perpetual rotation on our stereos so that may have affected the mood, too.

Have you begun playing these songs live and which songs have elicited the strongest reaction from your fans?
The people coming to our shows in London know the EP tracks and sing along to some, which is stunning and flattering.  We debuted some brand new tracks the other week and they went down really well, too. The new songs will be ready early next year.