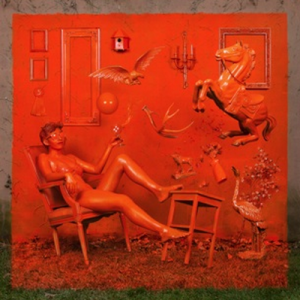 The members of Diamond Youth share a common back catalogue of bands who have inspired and defined their developing years as artists, and those influences decorate their sound like merit badges.  From Weezer to Queens of Stone Age, and Foo Fighters to the Beach Boys, their admiration of timeless and arena-worthy rock rock music mixed with their own unique artistic chops have already translated into two formidable EPs that have turned heads and earned the attention of Topshelf Records, who added the band to their growing roster.
Diamond Youth announced they will release their new EP titled Orange on January 22 through Topshelf Records. Ghettoblaster caught up with Sam Trapkin to talk about it.  This is what he said…
When did you begin writing the material for your most recent album?
Basically right after we finished the one before, Don’t Lose Your Cool. We kind of write a lot.
What was the most difficult song to take from the initial writing stage through recording and mixing?  Why was it so troublesome?
Probably a song called “Swinging From You”. That may be a working title still, but it was just a wildcard from the very beginning. It was something where we knew HOW it should sound, but weren’t always sure what to play and how to make that sound.
Which of the songs on the record is most different from your original concept for the song?
Probably the same one. It definitely came to life in the studio.
Did you have any guest musicians play or sing on the record?
Our friend Angie played the cello on one part, but that’s about it! We played everything else. Including the glockenspiel. I was texting someone about it actually, and it was the first time my iPhone actually nailed it. Like when you’re typing “gonna” and it fixes it to Gubernational. Before I even got past “Gl…” it was like GLOCKENSPIEL!!!!!
Who produced the record?  What input did that person have that changed the face of the record?
A man named Brian McTernan. Brian is very good at finding the right sounds for different songs and parts. We tried a lot of different guitars/amps which we’re not used to. So I’d have to say that would be the most noticeable. Every song definitely feels very much like its own thing which we love.
Is there an overarching concept behind your new album that ties the record together?
The record is called Orange. Being Orange is the best possible thing you can be. Orange brings anything to life. It washes over you and changes you. I’m Orange right now.
Have you begun playing these songs live and which songs have elicited the strongest reaction from your fans?
Yeah, we’ve been playing two of them. They’ve been going over well, and people seem pretty into the song “Orange.” It’s a good party starter.