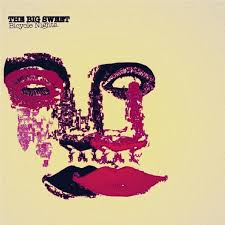 Most high school seniors may spend the morning of their prom day preparing their hair or possibly planning spots for photo shoots. The four members of The Big Sweet spent the better half of this day on a nine hour car ride back to Ohio from their Daytrotter session in Iowa. In many ways, this seems to encapsulate the theme of The Big Sweet’s history; they are teenagers whose quality of music continuously belies their young age (the members are all 19 at this point). Truth be told, with a near five year career, three recorded albums, numerous glowing reviews and 100 plus shows under their belt, the band’s youthfulness is far from its most interesting characteristic.
Originating in the Northeast Ohio area, The Big Sweet is a rock band whose style draws from a wide variety of genres such as power pop, psychedelia, baroque music, and avant-garde. While the band has been likened to artists both new and old (Wilco, Big Star, XTC, Elliott Smith), The Big Sweet has constantly pushed to defy easy classification, to sound fresh if you will. Building on the critical acclaim of Ultraviolet Rain, The Big Sweet released their third full-length record, Bicycle Nights, on August 27.
Ghettoblaster recently chatted with singer/guitarist/songwriter Sam Regas about the record.  This is what he told us.
When did you begin writing the material for your most recent album?
Most of the writing probably took place between late 2011 through early 2013. It was kind of stop-and-start writing/recording due to us going away to college and whatnot, but I think we managed to make it work.
What was the most difficult song to take from the initial writing stage through recording and mixing?  Why was it so troublesome?
“Wax Dolls” was relatively tricky. There’s an extended, swirly coda in the middle and very end of the song that was pretty undefined during the initial writing stages. There was definitely lot of trial-and-error in the studio involving backward loops and certain synth patches before we were able to achieve something that had the right feel.
Which of the songs on the record is most different from your original concept for the song?
“Pillars.” I initially wrote it on the piano intending it to be this really grand, sweeping album closer. Although, when we finally recorded it, we left it pretty spare: a piano track, some cut-and-paste effects, a bit of percussion. I think a lot of the song’s punch comes from its minimalist approach in a way that would have probably been lost had it been more full in terms of instrumentation.
Did you have any guest musicians play or sing on the record?
For the song,  “Glowing Alone,” we thought it’d be cool to throw in a horn section bit to the song, so we asked our friends Alex Michaud (trumpet) and Nolan Jones (trombone) to come by and lay down a part. Nolan also plays on “Wax Dolls.”
Who produced the record?  What input did that person have that changed the face of the record?
Wes McCraw engineered, mixed, and co-produced the record with us. This is the third time we’ve worked with him, so we do feel really comfortable recording and bouncing ideas off him. He’s a pro; I don’t know if we’ve ever to come to him with an idea (no matter how crazy) that he wasn’t able to pull off to some extent. Truly. Plus, he’s pretty much the chillest guy I’ve ever met. It absolutely makes for a relaxed recording environment.

Is there an overarching concept behind your new album that ties the record together?
That’s debatable. Not in terms of an obvious story arc or a getting across a specific message or anything like that. However, I think there’s a good bit of lyrical imagery on the record (fire, nighttime, bicycles) that carries a certain thematic link from song to song. Hopefully, those motifs serve to take the listener to a certain place or evoke something that’s palpable in the gut when they first hear it. I think any great music should be able to have that type of visceral impact regardless of what the true “meaning” behind the lyrics is.
Have you begun playing these songs live and which songs have elicited the strongest reaction from your fans?
Most of them have been played live, though some definitely required a good amount of restructuring before we were able to take them to the stage. “Somber Sighs” seems a pretty big fan favorite. It’s a pretty jangly number and probably the most immediate song on the record in terms of its “poppy-ness.” There’s also a somewhat infamous video of me having an atrocious voice crack during the recording of the song that Brad (our guitarist/keyboardist) put on YouTube. That probably helped up its popularity with some of our fans.
(Visit The Big Sweet here: http://www.facebook.com/thebigsweet.)