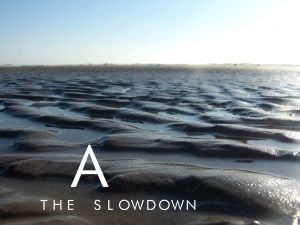 The Slowdown, a 6-piece band of brothers and friends from Kansas City, create a jaw dropping combination of alternative rock and post hardcore that is riff-based, roots-inflected, electronic-infused, and deftly experimental.  Their debut full-length, A, was recorded at Earth Analog studios near Champaign, IL by Matt Talbott of Hum, mastered at the Blasting Room in Ft. Collins by Jason Livermore, mixed and engineered by Jeremy Wilson, and produced by The Slowdown.
Not only are the band experts in the studio, but they’ve honed a tight live show, with notable performances at SXSW in the Midcoast Takeover showcase and at Middle Of The Map Fest. In December, the album dropped and captured the attention of local, regional and national press, who anointed them “one of the region’s best acts of the past decade.”
Ghettoblaster recently caught up with Sam Hoskin’s to discuss the band’s debut.  This is what he told us about it…

Some of these songs stretch back to about five years ago.
What was the most difficult song to take from the initial writing stage through recording and mixing?  Why was it so troublesome?

I would have to say “Unable To.” It was written as a much heavier, brooding song and it wouldn’t of really fit the vibe of the new album. By not bashing its way to the end, this song required so much feel on every level. All the way down to the mixing stages.
Which of the songs on the record is most different from your original concept for the song?
The track “All Gone.”  Being written five years ago, this song has truly taken on several different forms. And now has reached what I would think is the best rendition of the tune we’ve done to date.
Did you have any guest musicians play or sing on the record? |

Yes, on the final track of the album “Whispering Lights” first chorus features our good companion, Will Garside on lead guitar. He also plays the Shaman in our video for the song, “A Mirror, A Torch.”
Who produced the record?  What input did that person have that changed the face of the record?

We produced this album ourselves in pretty much every sense. Our preproduction was done at my house over the course of the past five years.  We had a very clear vision on our own of what we wanted this album to be.  A producer wasn’t really necessary at this point.  We like to think of ourselves as producers and engineers as well.
Our good friend Matt Talbott from Hum fame agrees.  He was more than supportive of us producing this album ourselves, and allowed us to have free reign over his studio without him even being there most days to turn the gear on in the morning.
Is there an overarching concept behind your new album that ties the record together?
Kind of – a main theme is definitely recognizing that there is, as Peter Gabriel puts it, “More Than This.”
Have you begun playing these songs live and which songs have elicited the strongest reaction from your fans?

Yes, our current single “To Wonder” has been in our set list for about eight months solid. It is always the one song most people will ask about after a show.  The album opener, “Acting Strange of Late,” has been a fan favorite for a few years.