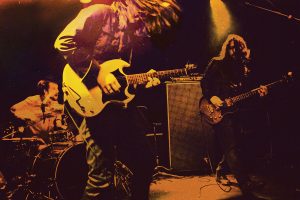 On their upcoming fourth release Gone With The Night, Los Angeles gutter rock trio Wake Up Lucid puts it simply: “Give us something real, something we can feel. Or get fucked.” This statement resounds as both rejection of fakery and pursuit of honest music, which have remained Wake Up Lucid’s only guidelines for writing and performing throughout the half decade’s worth of their existence. The new album was produced by Icarus Line’s Joe Cardamone at his studio, Valley Recording Co. in Burbank and was released March 31 on WUL Records.
Gone With The Night is a sampling of the fruits of the group’s determined efforts to develop further as song-writers, offering songs that are much more focused and realized, and diversely dynamic — a departure from the band’s usual m.o. of grit and groove hammered-out at high volumes — while still maintaining the inimitable Wake Up Lucid vibe that has crept around L.A. for the past few years.
Their authenticity and immediacy as writers and performers is rooted in their experience of growing up together in the same extended family—a musical one to boot. After pursuing their respective musical aspirations in other outfits, they formed their own some six years ago, distilling their now matured, ripened abilities into the woozy juggernaut that is Wake Up Lucid.
Early on, cousins Ryan, Ian, and Jamie set up home base at Silverlake Lounge on Sunset Boulevard as a challenge to themselves, honing their writing and performance skills in front of one of the most demanding audiences in the world. What resulted was…being offered an album release party, then a residency, followed swiftly by media acclaim from the likes of Rolling Stone, LA Times, Vice/Noisey, Filter, Nylon, MOKB, KEXP… and plenty of others!
Much of their crucial development as a band has been facilitated by Joe Cardamone who has acted as producer and assisted in the fine-tuning of the band’s sound on three releases, operating out of his studio, Valley Recording Co. in Burbank. Joe has this to say about Wake Up Lucid:
Ghettoblaster recently caught up with WUL’s Ryan Baca to discuss the album. This is what he told us.
When  did you begin writing the material for Gone With The Night?
We always have songs in the works but we started putting the concept of this album together in January of 2014.
What  was the most difficult song to take from the initial writing stage through  recording and mixing?  Why was it so troublesome?
I think the song we went in with the least overall plan for was “Get Fucked.” We had the general idea and vibe but nothing was set. We track everything live so as we started to run through it, it took a couple takes to find the right feel. We decided to build the song up and then let it fall apart and on the first try the whole thing just came together, that is the take on the album. As far as mixing, we didn’t have much time in the studio so we mixed all six songs in about three days which didn’t leave a lot of room for us to go back and forth and really focus on small details.
Which  of the songs on the record is most different from your original concept for the  song?
“Gone With The Night” is the most different only because we had never played it before. It was an acoustic song I had been writing but hadn’t finished it enough to bring to the band. We had some extra time on our last day in the studio so we started to run through it and it all just came together, lyrics and all. The addition of mandolin and the echoplex on it was us just experimenting in the moment.
Did  you have any guest musicians play or sing on the record?
The Icarus Line’s Joe Cardamone played the organ on “Don’t Fear.”
Who  produced the record?  What input did that person have that changed the face  of the record?
Joe Cardamone (The Icarus Line) produced the record. We have been working with Joe the last few years and every time it’s a really good experience. Bringing in a producer is like adding a band member, Joe fits in perfectly with us and is looking to get the same sounds and vibe that we are.
Is  there an overarching concept behind your new album that ties the record together?
I think the overall concept is mood. You can let yourself drift along with it, in and out of the different moods that each song captures. It’s not a record that’s meant to be thrown on in the background of a party or anything like that. This is for the listener to sit with and see where it takes them, or where they take themselves with each song.
Have  you begun playing these songs live and which songs have elicited the strongest  reaction from your fans?
We have been playing a couple of these live the last couple months and the response has been great, the response to “Get Fucked” has been amazing. Every time we have rolled into it, it looks like we have the room hypnotized, from the crowd to the bartenders to the guys working the door.
(Visit the band here: http://www.wakeuplucid.com/.)