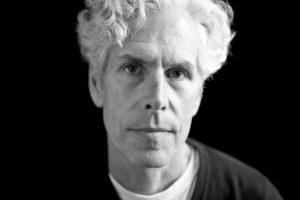 After decades of making records for the fringe, stalwart outsider Rob Fetters delivers Saint Ain’t, his most exciting and accessible collection, which was recorded in Los Angeles, Cincinnati and at Adrian Belew’s studio in Nashville. Saint Ain’t’s MC5 meets Todd Rundgren meets Zen stew features contributions from Counting Crows founder Matt Malley, Midnight Star vocalist Belinda Lipscomb, and Krystal Peterson of the Victor Wooten Band.
For those not already in the know, Fetters co-founded legendary avant-guitar pop band The Bears alongside singer/guitarist Adrian Belew, topping AAA charts a decade ago with Car Caught Fire and collaborating with King Crimson’s Robert Fripp. Fetters also fronted the underground ’90s alt-pop band, psychodots. In his wildly diverse career, the “criminally underrated guitarist” (Rod Lockwood / Gannett) played with the Cincinnati Pops Orchestra, produced afro-pop records, toured alongside Over the Rhine, and gigged with KISS, Todd Rundgren, Cheap Trick, and The Heartless Bastards. Fetters is cited by MGMT founder Ben Goldwasser as an early influence and is regarded by his fans as a guitar hero and brilliant singer/songwriter.
Ghettoblaster recently spoke with Fetter about the album.  This is what he shared.
When did you begin writing the material for Saint Aint?
2007.
What was the most difficult song to take from the initial writing stage through recording and mixing?  Why was it so troublesome?
“Forever Never”. I kept revising it until it was perfect. Perfectly dead. In the end I threw out all my fixes and kept the beauty marks. My favorite historian – Jaques Barzun – wrote in Dawn To Decadence: “The permanent condition of artistic creation: hours of solitary, painstaking work, much acquired knowledge, long reflection and revision, which together increase mastery.” There’s your “troublesome”. That’s not to say it isn’t worth it; it’s even fun to fuck up all over the place. Maybe the difference between the pro and the amateur is the willingness to fail repeatedly. I hate rejection, including self-imposed rejection, but the best art isn’t made by sissies.
Which of the songs on the record is most different from your original concept for the song?
“Life & Death Boogie”. It was almost a jingle for a sandwich chain.
Did you have any guest musicians play or sing on the record?
Matt Malley (Counting Crows) played bass on four tracks. 13-year-old  Bee Haskins (L.A.) sang on two tracks. Clyde Brown (The Drifters, Ben E. King), Belinda Lipscomb (Midnight Star), Gerald Brown (Shalamar, Jody Watley), Krystal Peterson (Victor Wooten Band) all sang b/u. Chris Arduser and Bob Nyswonger (my psychodots bandmates and co-members of The Raisins and The Bears with Adrian Belew) played drums and bass, respectively. My son, Noah, played drums on a track. More details are on the liner notes.
Who engineered and/or produced the record?  What input did they have that changed the face of the record?
All Me, except drums were recorded at Adrian Belew’s studio by Ken Latchney. Matt Malley and Bee Haskins were recorded in L.A..
Is there an overarching concept behind your new album that ties the record together?
Yes: What you do is what happens to you. So, be nice. Don’t quit, no matter what.
Have you begun playing these songs live and which songs have elicited the strongest reaction from your fans?
I’ve played ‘em all. My fans say it’s the best album I’ve ever made. I don’t know about “strongest reaction”. I’ll try to pay more attention. I’m just grateful that they’re listening.
(For more Information about Saint Ain’t and Rob Fetters: www.robfetters.net.)