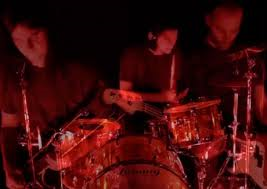 Barrows’ Red Giant is fittingly massive in thematic scope as it is in sonic heft. A concept album about the life of a star and what happens after it dies, the band depicts the stages of celestial death throughout the album’s five epic tracks. Akin to similarly expansive musical works like Pink Floyd’s Meddle, Tangerine Dream’s Stratosfear, King Crimson’s Red and a light dose of sci-fi soundtracks, Barrows build upon entrancing, circling riffs and rhythms intercut with explosive peaks and brilliant subtlty.
To capture this sweeping endeavor, the band teamed up with revered engineer Toshi Kasai (Melvins, Tool), hunkering down for several months at Kasai’s newly built North Hollywood studio. The resulting 5-track, 40-minute album was mastered by Chris Common (Palms, Pelican) and will be available on LP and download on May 6.
Ghettoblaster recently caught up with drummer  Richy Epolito to discuss the record.  This is what he said.
When did you begin writing the material for your most recent album?
We began writing Red Giant in the middle of 2012.
What was the most difficult song to take from the initial writing stage through recording and mixing?  Why was it so troublesome?
The most difficult to song to record was “Nebula”.  During the intro there are some notes that are really high on the fretboard that had to be bended and wahed at the same time. We did a bunch of takes to get the tone and feel right.
The most difficult song to mix was “Black Hole”. The rest of the songs just have two guitars, but this one had a lot of overdubs, so it took a while to balance them all nicely.
Which of the songs on the record is most different from your original concept for the song?
We were on a very tight budget with this recording, so every song already had a very detailed and complete demo.  The recorded songs have the exact same composition and structure as our demos.  Hopefully next record we’ll be in a different situation so that there is time for experimentation while recording.
Did you have any guest musicians play on the record?
We did not have any guest musicians on this record.
What input did Toshi Kasai have that changed the face of the record?
Toshi had a huge impact on the way this record sounds.  He utilized some room microphone techniques that we had not planned on but ended up liking a lot.  He made the record sound very dark and cold, were very happy with how it turned out.
What is the overarching concept behind your new album that ties the record together?
The concept of the album is about the life of a star and what happens after it dies (explodes).
Have you begun playing these songs live and which songs have elicited the strongest reaction from your fans?
We have played all these songs live except “Black Hole”.
We probably won’t ever play that one live, it was more of an experimental track for the record only.  The title track “Red Giant” definitely gets the strongest reaction.  It’s probably the heaviest song we have written, and the band really gets into it when we play it live.
(Check out the live video for “Beyond” here:  https://www.youtube.com/watch?v=ZA2l-5iwO2c.)