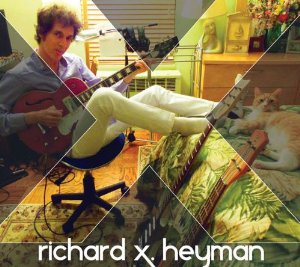 Veteran singer/songwriter, multi-instrumentalist and D.I.Y. recording pioneer Richard X Heyman was one of the first “one man band” recording artists, following in the grand tradition of Paul McCartney, Emitt Rhodes and Todd Rundgren.  This pursuit began following a stint with NJ based garage band The Doughboys, in the ‘60s. His abilities have won him a fiercely loyal grass-roots fan base and reams of acclaim over the past two and a half decades. All Music Guide called him “perhaps America’s greatest unsung hero of power pop, a songwriter of uncommon talent and intelligence and a one-man rock band without peer,” while the Hartford Courant proclaimed him to be “a true heir to [Brian] Wilson’s mantle, amid an ocean of pretenders.”  Heyman releases X, his 10th solo album via Turn-Up Records this Fall.  As on his past efforts, he performs all vocals and instrumental tracks.
Ghettoblaster recently caught up with Heyman to discuss his latest work.  This is what he told us.
When did you begin writing the material for your most recent album?
I wrote a lot of songs while I was working on my previous album, Tiers/And Other Stories, mostly on piano.  There were several songs left over so I started transposing the piano parts to guitar for this current album, the reason being, I wanted to get back to a guitar oriented production.  Tiers was a piano-based project.  The rest of the songs were written as we started recording, except for one called “Hangman Smiles”, which is a song I wrote many years ago.
What was the most difficult song to take from the initial writing stage through recording and mixing?  Why was it so troublesome?
I’d have to say “So Much For Forever”.  I found it a difficult song to sing.  I also rewrote the lyrics after I listened to the first version.  I usually double track the vocals when they are in harmony, but because the vocal was so hard to get right I gave up on the doubling.  I was ready to drop it from the album but our mastering engineer Alex Saltz really liked the track and convinced us to leave it on.
Which of the songs on the record is most different from your original concept for the song?
Probably “If You Have To Ask,” which was a piano instrumental that I wrote after our cat Roy suddenly died from a heart attack.  I subsequently turned it into a vocal song with guitars.
Did you have any guest musicians play or sing on the record?
No, not really, except for the last bass note of “When Denny Dropped Out of the Scene” which was played by our mixing engineer Tony Lewis because the note I played didn’t sustain long enough.  He also played the last three chords of “Please Be Mindful” because I thought they needed to sound “fatter.”
Who produced the record?  What input did that person have that changed the face of the record?
Well, I’m credited as producer but my wife and recording engineer Nancy helped me every step of the way.  I would probably have settled for takes that she insisted weren’t up to par.  So I would have ended up with a much rougher final product without her input.  And of course Tony and Alex contributed enormously to the way the album sounds.
Is there an overarching concept behind your new album that ties the record together?
The initial direction for X was to make a guitar album.  After all the songs were done, I noticed that the bulk of the lyrics were kind of dark.  A lot of songs dealing with loss.  If this was a record, each side would end with a positive love song – “Somebody Has Finally Found Me” and “Will To Go On”.  I think without those two songs the whole thing would be too pessimistic.
Have you begun playing these songs live and which songs have elicited the strongest reaction from your fans?
I will be debuting many of these new songs for a broadcast on Siriux/XM Radio’s Loft channel show “From the Living Room to the Loft” on October 4 at 7 PM.  All are welcome to attend.
(Visit Richard here:
www.richardxheyman.com
www.facebook.com/richard.x.heyman)