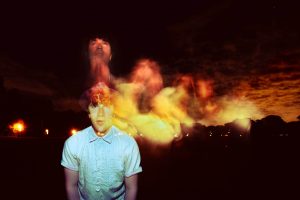 Brooklyn-based producer Loveskills creates a unique style of music that has proven to be quite difficult to pin down, blending together elements of electronica infused R&B with pop sensibilities and occasional hints of hip hop.
His 2013 release, the aptly titled Multiplicity, was described as everything from “a modern day pop furore” to “a diverse extra-sensory experience” to “a fusion of synth, bass, and subtle vocals” to “an oddly compelling hybrid of synth-pop and hip hop” and thankfully, it all breaks down to something “relentlessly accessible and stupefyingly catchy.”
Back with his newest collection of songs, laced with influences of both R&B and the trap or EDM you’d hear blasting from car stereos in Brooklyn, Loveskills has crafted another appropriately titled EP Pure which was created with just that sentiment in mind. Focusing on the heart of the song, rather than relying on computers and studio production during the writing process, Loveskills (aka Richard Spitzer) drafted all the melodies, chords, and lyrics for the EP with a focus on how it felt to sing and perform the songs on the piano before turning to electronics.
Pure is slated for release on November 4 via Brooklyn label No Shame (Black Taxi, Pompeya, Felix da Housecat). The five-song EP kicks off with a cover of Smashing Pumpkins’ “Luna” and proceeds with five pure, undiluted, entirely blissful tracks of the classic Loveskills sound.
Ghettoblaster recently caught up with Spitzer to discuss the EP. This is what he told us about it.
When did you begin writing the material for your most recent album?

I started during the after mixing the Multiplicty EP early 2013.
What was the most difficult song to take from the initial writing stage through recording and mixing?  Why was it so troublesome?
“Point Of View.” Iit took a different shape once I started playing the song live felt like some dynamics and transitions needed to be re crafted a bit.
Which of the songs on the record is most different from your original concept for the song?
I’d actually have to say these tunes were all conceptualized to sound pretty close to their current state.
Did you have any guest musicians play or sing on the record?
Yes. The one and only Phaze Future raps on “White Diamonds.” He also co wrote the tune with me. He’s a true lyrical genius!
Who produced the record?  What input did that person have that changed the face of the record?

It was produced by yours truly with the additional mixing skills of Patrick Brown of Different Fur Studios in San Fran.
Is there an overarching concept behind your new album that ties the record together?
Pure is an attempt in creating pure music that is also accessibly pop. centered all the material around that innocent naive inner day-dream voice that somehow still exists. That’s where a lot of my music stems from.
Have you begun playing these songs live and which songs have elicited the strongest reaction from your fans?
I’ve been performing half the record live so far. I want to get to ’em all eventually. It just takes a little time to adapt this studio laden sound for a band setting. I think of the live show as a separate musical endeavor where I can test my ability as a piano player and singer . Standouts…? I actually can’t tell so far which ones stand out the most. I was actually quite numb during my last performance.
(Visit Loveskills here: http://www.loveskillsmusic.com/.)