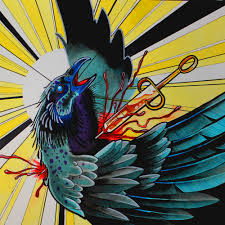 The Veracity of Solitude

There’s only so much a band who grew up on Bane, Integrity and Turmoil can do when they’re stuck on a small island in the Caribbean with barely any room to grow and next to no place to play when it comes to paying gigs. Despite all the odds stacked against them, Puerto Rican hardcore trio KDC packed their bags in 2009 and moved to New York so they could continue to do what they love on a consistent level.
After years spent touring the country and releasing various EPs and splits along the way, KDC finally caught the attention of Head 2 Wall Records who released The Veracity Of Solitude (produced by Andy Nelson of Weekend Nachos) this week.
Ghettoblaster recently caught up with KDC vocalist Ricardo to discuss the effort.  This is what he said about it.
When did you begin writing the material for The Veracity of Solitude?
We began writing some songs once the year started. We took a few breaks here and there. In classic KDC fashion, we didn’t get serious until we found a solid studio to track in, and someone to release it.
What was the most difficult song to take from the initial writing stage through recording and mixing?  Why?
None of them, really. We’ve had so many failed attempts at recording our music that we were very clear about what we wanted.
Which of the songs on The Veracity of Solitude is most different from your original concept for a song?
I feel most of them are. When we write new music, we always reflect upon old material so we don’t find ourselves falling into patterns.
Did you have any guest musicians play or sing on the record?
Nope. Holographic 2pac tried spittin’ some lines. I wasn’t feelin’ that shit.
Who produced the record?  What input did that person have that changed the face of the record?
We produced most of the material ourselves. It was co-produced by Andy Nelson (Weekend Nachos guitarist); but I think Andys influence wasn’t as prominent in terms of composition as it was in helping us choose the right effect/tone on certain parts. It was extremely helpful to have that outside perspective. Like I mentioned  earlier, we’ve definitely found ourselves repeating certain things at times.
Is there an overarching concept behind your new album that ties the record together?

I think that if I try and tie everything together I can. But I’d be lying if I said I did it intentionally. Most of the record just talks about the issues I’ve dealt with since I’ve moved to Buffalo. Everything in my life revolves around this music. There is absolutely no sense of balance.
Have you begun playing these songs live and which songs have elicited the strongest reaction from your fans?
On this last tour we did to California we played most of The Veracity of Solitude. We love playing it. The reactions have been AMAZING. We couldn’t be more excited.
(Visit KDC here: https://www.facebook.com/KdcPrhc?filter=2.)