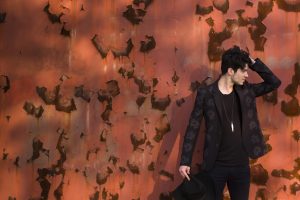 For critics and Rett Smith’s cross-country fans, it’s hard to believe that just three years ago the singer and guitar aficionado was well into a professional sports career. Having never sung in public didn’t stop him from taking the stage at the legendary House Of Blues in Los Angeles to play highly personal songs, each of which rip and riff like a classic rock anthem from another time.
For those reasons, Tularosa is monumental for Smith, marking much more than a debut effort, but a creative transformation. His EP is a distinct offering of hard luck blues, outlaw country, 1960s garage, and early rock n’ roll that candidly reveals Smith’s upbringing on Hank Williams, Waylon Jennings, Reverend Gary Davis, and Buddy Guy. It features a honeyed, blues-infused lead single “One Block Bar,” a kicking cover of Roky Erickson’s “Two Headed Dog” and a heartfelt ballad “Warmest Winter,” which initially caught Nicolo’s attention.
After discovering Smith’s heartfelt performance of “Warmest Winter,” Grammy-winning producer Joe Nicolo immediately flew him out to Philly and has since taken him fully under his wing as something of a career guru. The athlete-turned-musician approached music with the same precision and confidence that he did athletics, and that dedication and natural musicality enabled him to fast-track his newfound music career.
Ghettoblaster recently caught up with Smith to discuss the EP. This is what he said about it.
What was the most difficult song to take from the initial writing stage through recording and mixing? Why was it so troublesome?
This album came together really easy. We cut everything live so everything happens very organically and naturally. Music is meant to be a struggle, something to overcome. I embrace the trouble.
Which of the songs on the record is most different from your original concept for the song?
I originally wrote “Warmest Winter” to be a blues and still sometimes play it that way. On the record it’s a bit of a ballad. Still seems to have some blues pooping in there though.
Did you have any guest musicians play or sing on the record?
I had a pretty amazing cast of musicians in the studio. David Uoskinen who is a member of the Hooters and has played with everyone, including Stevie Ray Vaughn and Johnny Winter. Chuck Treece is a legend and has been in Bad Brains and a younger guy named Mitch Beer, who is one of the best bass players I’ve ever heard. Was a pleasure getting to play with them.
Who produced the record? What input did that person have that changed the face of the record?
Joe Nicolo produced the record and is definitely a legend in music. You can’t argue with nine Grammys and 100 million sales. He didn’t “change the face” but every nuance that you hear is accentuated because of Joe’s brilliance.
Is there an overarching concept behind your new album that ties the record together?
Pain, Longing, Heartbreak. Those always seem to be consistent in my writing.
Have you begun playing these songs live and which songs have elicited the strongest reaction from your fans?
Yeah they are all played live! “Lucky Strike” and “One to Blame” people always seem to really enjoy.
(West Texas-born rocker Rett Smith has premiered his debut effort Tularosa exclusively at Groundsounds. All six of the modern rock songs were produced by nine-time Grammy award-winner Joe Nicolo (Rolling Stones, Bob Dylan, The Fugees) and became available for purchase on September 18.
Stream Tularosa
Exclusive Groundsounds Premiere
Visit him here:
http://rettmusic.com
https://www.facebook.com/rettsmithmusic
https://twitter.com/rett_music)