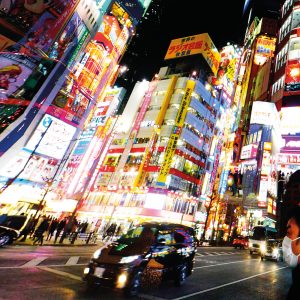 Waking Up to the Fire

Based in a city known for stagnation and business as usual, Washington DC’s Drop Electric exists to break the mold. Drop Electric’s music is a manic barrage of soaring female vocals, distortion, tribal percussion, and electronic bleeps, controlled by structured, dynamic songwriting. Ramtin Arablouei, Neel Singh, Sho Fujiwara and Kristina Reznikov’s shared experiences as children of immigrant families contribute to an air of vague unfamiliarity in their music.  Their songs are a collection of happy accidents.
In 2013, the four members of Drop Electric sat down to record songs that would eventually become Waking Up to the Fire. The result is a bass heavy, electronic collection of songs. Like past Drop Electric releases, the songs on Waking Up to the Fire have a cinematic quality while Reznikov’s voice and lyrics convey a sense of desperation in an increasingly disconnected world.
Ghettoblaster recently caught up with Ramtin Arablouei to discuss the record, which dropped on October 22 on Lefse Records.  This is what was said.
When did you begin writing the material for your most recent album?
Early 2013.
What was the most difficult song to take from the initial writing stage through recording and mixing?  Why was it so troublesome?
“Among the Dying Dreams.” That is the oldest song on the album. It went through dozens of iterations. It was initially written in 2012, but then just sat on my hard drive for months. It ended up being a track with live horns, percussion, and vocals. I don’t think I expected it to take a year to finish.
Which of the songs on the record is most different from your original concept for the song?
We generally don’t have “concepts” for our songs. We really just write without planning or thinking about it ahead of time. So we never really experienced a song that changed from our original concept because we never have original concepts. However, I think “Among the Dying Dreams” is the song that ended up in a MUCH different place than it started.
Did you have any guest musicians play or sing on the record?
No.
Who produced the record?  What input did that person have that changed the face of the record?
I produced the record in our own studio, Azamat Studios in Bethesda, Maryland. Our writing and mixing style is collaborative but generally I’m sitting behind the recording desk while everyone else gives me input. The tracks are produced like hip hop tracks and that mostly comes from me. I’m a real hip hop head. No matter what I do the beats and production always comes out having a subtle, or not so subtle, hip hop bounce.
Is there an overarching concept behind your new album that ties the record together?
We didn’t set out with a concept in mind. Now that I look back on it I definitely see that this record is way more aggressive than anything we’ve done in the past. The songs are shorter, the drums are bigger, and Kristina’s vocals and lyrics have a sense of urgency in them. I think the album title really fits that theme. I could also just be creating connections that aren’t there.
Have you begun playing these songs live and which songs have elicited the strongest reaction from your fans?
We started playing “Blue Dream” recently and it has gotten a really strong reaction from people at our shows. We just played a show in Brooklyn and the audience reacted really strongly to the song. We end it with a drum, MPC, cowbell jam. Everyone loves cowbell right?
(Visit Drop Electric here: http://www.dropelectric.com/.)