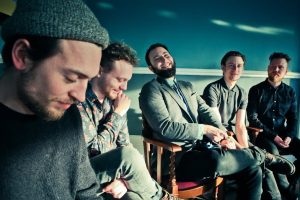 To Kill A King (photo by Wolf James Photography)

London indie five-piece To Kill A King has signed to Xtra Mile Recordings (the home of Frank Turner, Against Me!, etc) and their self-titled sophomore album was released earlier this week, Tuesday, March 3.
If you’re into big-sounding UK bands like Bombay Bicycle Club, Maccabees and Foals, these guys should be in your rotation. Their last record, Cannibals With Cutlery, was a bit more folk-leaning.  But, this new LP is way more guitar-driven, soaring and expansive.
Additionally, To Kill A King actually contributed to Bastille’s breakthrough record, Bad Blood, which led to them supporting Bastille on a massive North American tour, an appearance at SXSW and opening dates for Frank Turner on the West Coast in 2014.
Ghettoblaster recently spoke with frontman Ralph Pelleymounter about the record. This is what he told us.
When did you begin writing the material for the self-titled record?
Some of it was written before our first album was released. It’s been a long time in the making and many songs were left behind. We really wanted to make a tight, fast-paced record that retained all the good things from the previous record.
What was the most difficult song to take from the initial writing stage through recording and mixing? Why was it so troublesome?
“Friends” was tough just because not everyone in the band was convinced by it when I first brought it to them. Strangely, now it is our favorite to play live.
Which of the songs on the record is most different from your original concept for the song?
“Good Times (A Rake’s Progress)” had much more of an Americana vibe to it in the demo. Now it sounds like something Jack White or the Kinks might do.
Did you have any guest musicians play or sing on the record?
Edith Violet and Alice James do some backing vocals.
Who produced the record? What input did that person have that changed the face of the record?
Half-and-half mark crew and Ben Jackson. Both had loads of input. A lot of that was trusting in our old demos, finding out what was great about them and what needed improving.
Did I hear that you guys contributed to Bastille’s Bad Blood? How did that collaboration come together?
We did some backing vocals on a few tracks, “Pompeii” being the main one. Eh eh oh etc etc. Dan [Smith] just rang me up one day.
Is there an overarching concept behind your new album that ties the record together?
There is no overall concept; it’s a much more personal record. I suppose it does document the last two years of my life pretty well. Not sure how I feel about my life being a concept, though.
Have you begun playing these songs live and which songs have elicited the strongest reaction from your fans?
We haven’t. Tour starts next week. We can’t wait, though.
(Visit To Kill A King here: https://www.facebook.com/tokillaking .)