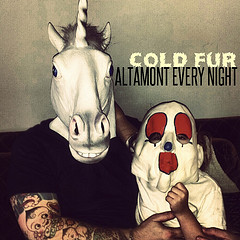 Cold Fur, a no-shit band of East Coast heavyweights, born from two of Jersey’s finest, The Want (Southern Lord Records) and Rye Coalition (Dreamworks, Gern Blandsten), are intent on providing a platinum encrusted sonic pillow filled with cotton candy for the battered cranium of rock and roll to rest itself upon.  The long and short of it is thus, Cold Fur have come to melt faces and swallow hearts. So drink from the chalice rock and roll children. Count your sheep and secure your goats because once it’s on, it’s on, ad infinitum.
Ghettoblaster talked to Cold Fur mouthpiece Ralph Cuseglio about the phenomenon known as Altamont Every Night, which is due out on their own Cold Fur Records on March 5.  This is what wisdom he was willing to impart about it…
When did you begin writing the material for your most recent album?
We started writing the album a while back…probably Fall 2011. It’s taken us a while to get it recorded, mixed, and mastered.  And to figure out how to actually go about putting it out. We often joke that we feel like cave men or like that movie “Encino Man” having been thawed out after many years in ice. Just trying to figure out how to function in a modern world,.. being confused and not recognizing things. None of us have put out a record in about seven years. The process is completely different now. Download cards…shit’s crazy! So, we’ve had to navigate a bunch of things that are new and different. Label, no label, which is better? Ultimately, it made sense to put out the record ourselves.

What was the most difficult song to take from the initial writing stage through recording and mixing?  Why was it so troublesome?
“Just Like Brain Jones” We almost didn’t record it. I think it was the last one we tracked. We weren’t really sure it was one of our strongest songs. Vocally, I tried a few different things while recording it. We fucked around with the guitar sound a lot too, and then ultimately settled on the original live track. During mixing I seem to remember everyone going back and forth about things too. It took quite a few passes to get the mix to where we felt comfortable.
Usually, songs that laborious are either really rewarding when they’re finished or they are a total shit show that you never want to listen to and ultimately leave off your album. We were happy with the way “Jones” came out.

Which of the songs on the record is most different from your original concept for the song?
There are two I think of right away. “Just Like Brian Jones” and “Altamont Every Night.” “Jones” because it took on a whole different meaning when I began to write the lyrics. It is probably the most personal song on the record for me, yet the most cryptic lyrically. The vocal delivery changed too. I experimented singing it at a higher register, somewhat out of my range…but ultimately stuck with it because it felt more frantic, the way I felt, but couldn’t seem to express when the events (that inspired the song’s lyrics) happened.
“Altamont”, like most songs on the album was vocally hashed out while recording. I just felt that song really came together after the vocals were on it. Adam (our guitar player) likes to joke that I “work better from home,” this song for him was proof of that… I think. It was a completely different song than how I sang it in practices.

Did you have any guest musicians play or sing on the record?
Prince and Femi Kuti. We had hoped to get some ‘80s cocaine sax on the record, but it never panned out. Called George Michael’s sax player and that guy from the “Lost Boys” movie, but both were unavailable.

Who produced the record?  What input did that person have that changed the face of the record?
No producer. Steve Albini engineered the record. Dave and I had recorded with him in the past and really had a good experience. We hit if off well and became friends. So, it made sense to return to his studio, a place where we felt comfortable after not having made a record for some time.  We were adamant about tracking to tape…going as analog as possible. So all the basic tracks were done live, in full takes.
One of the reasons you go to Steve is because you don’t want anyone else’s input. He’s not going to fuck with your songs. He knows how to record bands to tape…he’s arguably the best there is. The studio is his input, his instrument, or “stamp” if you will. He gets amazing drum sounds. The only input we got was whether or not he felt one take had a better vibe then another.

Is there an overarching concept behind your new album that ties the record together?
Not particularly. We think it is a pretty diverse record musically. We wrote all these songs as a band that was just starting out. There was no vision or concept of what our band or songs should be. So, if we liked the feel of a song, the way it sounded…we just went with it, without getting so caught up with does this “fit” what were going for. We think it’s a solid, in your face kind of record. The main theme behind the title “Altamont Every Night” was to make a band in which their concerts and music  were like The Rolling Stones Altamont show, every night of the tour, meaning insane, crazy, people might get hurt….

Have you begun playing these songs live and which songs have elicited the strongest reaction from your fans?
I think our fan base is just starting to grow. We’ve played a total of about 15 shows, in New York and New Jersey. So, most people have heard the songs live only a few times. With the album coming out, hopefully they’ll be some familiarity. But, judging from crowd response “Just Like Brian Jones”, “Habitual Line Stepper” and “Pigs of Holiday” get pretty good reactions. A guy came up to me after our last show and said, “That really fast one made me want rip the guy’s face off next to me.” I took it as a compliment. But I think he just smoked DMT before we played.