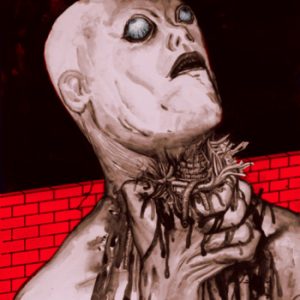 Psymun is a 21-year-old producer from Minneapolis, who released his fifth EP, an eight track collection of warm and inimitable instrumentals and I’m sending over my brand new instrumental EP, Heartsick. The EP is designed to hold fans over until he delivers his full-length with K.Raydio in November.
Ghettoblaster recently caught up with Psymun to discuss the EP.  This is what he said about it.
When did you begin writing the material for your most recent EP?
All of it was written, produced, recorded and mixed in the month of October.
What was the most difficult song to take from the initial writing stage through recording and mixing?  Why was it so troublesome?
I would say track two, “Fuck Bush” was a tough one, I spent a lot of time with the sample and the drums, trying to perfect it. In the end, it makes for my favorite track on the EP.
Which of the songs on the record is most different from your original concept for the song?
Definitely track four, “Dead Albatross.” The track features one of my favorite rappers, Chester Watson. Heartsick was originally supposed to be 100 percent instrumental, but then the night before I released the project, I contracted Chester to see if he wanted to be the one feature on the EP. He was psyched to be a part of it.
Did you have any guest musicians play or sing on the record?
Just Chester Watson, a 16-year-old MC from St Louis, MO.
Who produced the record?  What input did that person have that changed the face of the record?
I did, everything on the record is done by me, other than Chester Watson’s part.

Is there an overarching concept behind your new EP that ties the record together?
The overall theme of the EP is heartbreak. I know it can be difficult to portray a mood when your music is purely instrumental, so I try my hardest to evoke feelings and emotion without saying a single word.
Have you begun playing these songs live and which songs have elicited the strongest reaction from your fans?
I haven’t played any of them live quite yet, this Friday will be the test.
(Check out the single, “Dead Albatross” (featuring Chester Watson) here: https://soundcloud.com/psymun/dead-albatross-featuring)