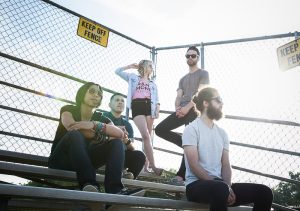 Even if you don’t recognize the band by their moniker, chances are you’ve probably heard Act As If in your favorite TV show. The Los Angeles-based, indie-pop act has had their music featured in Pretty Little Liars, The Real World, Cougar Town, Teen Mom, The Vineyard and more.
The quintet is prepping the release of their sophomore album Steady this month and have a single perfect to accompany TV’s next epic romance scene.
Ghettoblaster recently caught up with vocalist Peter Verdell to discuss the record and this is what he said.
When were the songs from Steady written?
The earliest songs were written in fall of 2012, and the latest ones were finished in spring of 2014. There’s a lot of life that happens in the span of a year-and-a-half, so, the album tackles a handful of different themes.
What was the most difficult song to take from the initial writing stage through recording and mixing?  Why was it so troublesome?
Probably “Uh Huh.”  There’s not really a chorus in the song…it doesn’t follow the standard song structure, and I just second-guessed myself a lot with it.  I thought the song was rad, but the band’s opinions were mixed, and I showed the demo to my friends and some loved it and some didn’t like it at all.  It came down to the wire, and I decided “ok let’s do it” so we went into the studio really last minute and tracked it…coming up almost all of the parts right before we recorded them.  It turned out well, thankfully!
Which of the songs on the record is most different from your original concept for the song?
Honestly, none of them – which sounds dumb to say.  But, I worked really hard to get them all recorded and mixed as close to how I had been imagining them in my head. They all sound better, probably, than originally in my head. But not different in terms of concept or general style.
Did you have any guest musicians play or sing on the record?
We have one special guest–a cellist named Dave Eggar–an amazing player who’s arranged and performed for Coldplay, The Who, and lots more.  He arranged and performed cello parts on “It’s That Simple,” and they are incredible. I feel very lucky.
Who produced the record?  What input did that person have that changed the face of the record?
I produced the album along with Adrian Alvarado…every song except for “Uh Huh”…which was produced by Eric Palmquist.  This is the first time that I didn’t work alone on the production stuff and having Adrian and Eric on board was huge.  It’s mostly a ton of little things that all add up to make big differences.
Is there an overarching concept behind your new album that ties the record together?
I think all of my songs stem from a  longing to be connected, whether it be in friendship or romance. In big cities I think it’s especially easy to become isolated and heartbroken:  people are busy, there are a million options for love, nobody settles down. The overarching theme of this album might be something like “Hey, life and love are hard, and you’ve gotta be willing to sweat it out if you wanna stay happy or make something last.”
Have you begun playing these songs live and which songs have elicited the strongest reaction from your fans?
We’ve played most of them live, with a few more to still figure out, but so far I’d say maybe “Keep My By Your Side.” It seems to be a gem.
(Listen to this stream of “LA Kid” – https://soundcloud.com/act-as-if/la-kid.)

Tags: Act As If, Featured