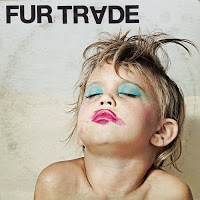 Vancouver based electronic duo, Fur Trade are preparing their forthcoming album, Don’t Get Heavy, for release via Last Gang Records (Crystal Castles, Metric) on July 23, Don’t Get Heavy is the group’s debut album. Featuring the songwriting talents of Steve Bays (Hot Hot Heat) on synths/drums/vocals and Parker Bossley (The Gay Nineties) on bass/guitar/vocals Fur Trade create what they describe as “Yacht Rock” with a heavy impact. It’s a sound which Bossley clarifies as “We take our shared love for soft pop from the 70’s and 80’s (Bowie, Sade, Hall and Oates), and add our own touch of modern grime and dirt in there.”
Recorded in Bays Tugboat place recording studio, the duo would hunker down for marathon writing sessions of days at a time with an array of vintage gear, boutique pedals and instruments. Examples of this equipment includes recording on Silvertone Amps from the 60’s, recording vocals on replicas of the same microphones that The Beatles recorded Abbey Road on and utilizing burbling analog synths that would make serious collectors drool. These marathon sessions would often include spending as much time on the mixing and post-production as most groups spend on their entire album. On their extreme attention to detail and composing, Bays says of the Fur Trade approach “Parker and I have very similar sensibilities when it comes to music that ends up in a sort of mad scientist being consumed by his experiments. I’m just obsessed with the blending of old equipment with digital sounds and the audio sculpting to us became just as essential as what riff of melody we were playing.”
Ghettoblaster caught up with Bossley as he prepared for the release to discuss the record.  This is what he said…
When did you begin writing the material for your most recent album?
We began writing about three years ago, starting rather innocently, without any real intentions of creating a full album.  Over time, in-between Hot Hot Heat tours and sessions, we began to amass something that resembled a record.  For a little while we actually completely stopped working on Fur Trade, and took the better part of a year off of it.  We eventually realized that this was something that we both mutually really believed in, and we dove back in and finished the record, signed with Last Gang Records and released the record.
What was the most difficult song to take from the initial writing stage through recording and mixing?  Why was it so troublesome?
I don’t think anything was necessarily ‘difficult’ per say, but I feel like the title track, “Don’t Get Heavy” changed the most from the original keyboard riff that Steve wrote.  It started out a lot more light hearted then the final product which to me sounds pretty dark wave with heavy hip hop percussion sounds.  DJ Sleepy Tom did some of that percussion programming which helped kick it up to the next level.  After that we took inspiration from a Piccioni keyboard riff from “Le Streghe” which Steve played on an Arp synth for the bridge.  The song also ended up being my favourite bass line of the record, which wouldn’t have come to fruition had the song not taken these turns.
Which of the songs on the record is most different from your original concept for the song?
“Inbetween Dreams” definitely took us the longest to finish.  The first half was something we had come up with in the course of a night on a serious whim.  Steve had called me while jogging and was rambling about an idea that he was clearly very excited about.  We met later and finished the first half that night.  We couldn’t figure out how to finish it.  After I heard the Tame Impala record Lonerism I was really inspired to just let the song melt into a hazy outro that kind of meanders around.  To me it actually ended up sounding a bit Bowie-esque, which I was definitely okay with.  The lyrics ended up being really inspired as well, I think they’re my favorite on the record.
Did you have any guest musicians play or sing on the record?

Nobody sang on the record except for Steve and I, but we did have Sleepy Tom add some programming to the drums in “Don’t Get Heavy” as I was saying earlier.  Ryan Dahle from Limblifter also played guitar on “Voyager”.
Who produced the record?  What input did that person have that changed the face of the record?
Steve produced the record, and obviously he had a huge part in making the record work.  I feel like without Steve’s mixing the record’s songwriting and genre hopping styles could potentially have confused some listeners.  He was able to tie everything together and merge all the songs into a complete album worthy of listening to start to finish.  It was also fantastic working with a producer who is just as excited as you about what’s happening.  We recorded the whole record at his studio, Tugboat Place.
Is there an overarching concept behind your new album that ties the record together?
I’ve been thinking about this quite a bit lately.  I don’t think lyrically we were cognizant of any overarching concept during the writing process.  I think really we just focused on every single song being a completely different piece of music.  Conceptually we did come to the project in the beginning with the goal of merging electronic music and organic instrumentation.  We wanted to hear music that could be defined as ‘electronic’ with live instruments and interesting structures.  I love the idea of Donald Fagen arranging an electro track.  Expensive chords and slick beats.  Melody.
Have you begun playing these songs live and which songs have elicited the strongest reaction from your fans?
We’re currently in rehearsals to play live, no shows have been played yet.  We plan on performing our music the same way that we created it, with electronic and organic elements working simultaneously together.