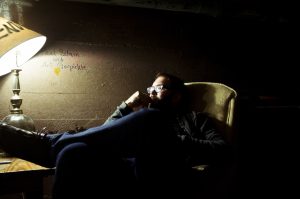 It’s been three years since Advance Base’s debut album, A Shut-In’s Prayer, made #19 on MOJO Magazine’s Best Albums of 2012 list. Since then, singer, songwriter and multi-instrumentalist Owen Ashworth has published a book of drawings, made beats for Chicago rapper Serengeti, recorded the debut single by psych-folk troubadour Julie Byrne, paid tribute to gospel and outsider music legend Washington Phillips (see 2013’s The World Is In A Bad Fix Everywhere EP), contributed electric piano and co-writing credits to Sun Kil Moon’s critically acclaimed 2014 album, Beni & produced more than a dozen other releases for his own label, Orindal Records. Ashworth has finally turned his focus back on his own music and given us Nephew in the Wild, the second official album by Advance Base.
Nephew in the Wild is a nostalgic, melancholic and occasionally harrowing collection of lo-fi indie rock and electronic pop. Electric pianos, drum kits, drum machines, autoharps, Omnichords, Optigans, Mellotrons & the occasional guitar lay the foundation for sweetly sad stories about lonely Midwesterners trying to make sense of their troubled pasts. In the world of Nephew in the Wild, the internet hasn’t been invented yet, and a change of address is the only thing a person needs to exit their old life completely. Disappearance, displacement, hell-raising, child-raising, Christmas, Michigan, arson, aging and animals are recurring themes throughout the album.
Nephew in the Wild was recorded by Ashworth in his basement in Oak Park, Illinois, with additional instrumentation by Nicholas Krgovich (No Kids, P:ano, Gigi), Mike Adams (Mike Adams at His Honest Weight, husband&wife), Howard Draper (Tre Orsi, Okkervil River, Shearwater) & Mat Sweet (Boduf Songs), among others. Ashworth’s baritone vocals & frank, conversational lyrics sit at the front of the mix throughout nine of Nephew in the Wild’s ten songs, while guest vocalist Jody Weinmann takes the lead on the album’s only co-write, “My Love for You is Like a Puppy Underfoot.”
Ghettoblaster recently caught up with Ashworth to discuss the album and this is what he told us about it.
When did you begin writing the material for Nephew in the Wild?
The earliest songs were written in 2011, but most of them weren’t finished until this past winter. I spent most of 2014 going through instrumental demos and paring down verses until I settled on the ten songs that ended up on the album. “The Only Other Girl from Back Home” and “Summon Satan” were the last songs I finished. “My Love for You is Like a Puppy Underfoot” was one of the very first Advance Base songs. I wrote the music and Jody Weinmann wrote the lyrics. We played it at our first shows, back when we were a real band, and even recorded a version during the sessions for A Shut-In’s Prayer. I used some of the original instrumental tracks for the Nephew in the Wild version, but Jody recorded a new vocal, and I added extra Rhodes and drum machines. I’m glad we waited to release it; this album needed it more than A Shut-In’s Prayer did, and Jody’s new vocal sounds so great.
Which of the songs on the LP is most different from your original concept for the song?
The songs “Nephew in the Wild” and “Pamela” both came from a single demo idea. The original lyrics were about a father in prison sending coded Satanic messages and instructions to his teenage daughter, who was being raised by her grandmother in rural Michigan. The music and melody turned into “Nephew in the Wild,” and the story eventually became “Pamela.”
How does Nephew differ from the critically lauded A Shut-In’s Prayer?
A lot of A Shut-In’s Prayer was recorded live in a room with other musicians. Nephew in the Wild was mostly recorded by me, alone in my basement, while my kids were sleeping upstairs. With two small kids running around, it was tough to find time to record, let alone rehearse with a band, so I’d record on my own whenever I found the time. I roped in some friends like Nicholas Krgovich, Howard Draper, Mike Adams, and Mat Sweet (from Boduf Songs) to record their own overdubs and email me the files. I didn’t think it was possible, but I ended up with an even lonelier sounding album than A Shut-In’s Prayer.
The lyrics make numerous references to places in the state of Michigan. Does the entire record follow one narrative? Was any of it written in Michigan?
I had the initial idea for the album while staying in a motel in Houghton, way up on Michigan’s Upper Peninsula. I went up there to write and record demos, but I mostly just ended up drinking and watching TV. I did most of the real writing back at home in Illinois. Except for the song about Milwaukee, the record takes place in Michigan between 1975 & 1992. There are some overlapping characters and repeating themes throughout, but it isn’t exactly a single narrative rock opera or anything like that. I meant for the themes and connections to feel kind of dreamy and confusing.
What are your touring plans for summer or fall?
I’ll be touring the western United States and Canada throughout July, and then I’ll tour the eastern United States a little more of Canada in October. With any luck, there will also be a few UK/EU dates in between and after. All the dates will be at advancebasemusic.com.
(Visit Advance Base here: https://twitter.com/advancebase https://www.facebook.com/AdvanceBase http://www.advancebasemusic.com/
Live dates:
07.14 • Waypost (Portland, OR)
07.15 • Rendezvous (Seattle, WA)
07.16 • Railway Club (Vancouver, BC)
07.17 • Anacortes Music Channel (Anacortes, WA)
07.20 • Diabolical Records (Salt Lake City, UT)
07.21 • Lion’s Lair Lounge (Denver, CO)
07.25 • Library House (Urbana, IL)
07.26 • Public Space One (Iowa City, IA)
08.11 • Burlington (Chicago, IL))