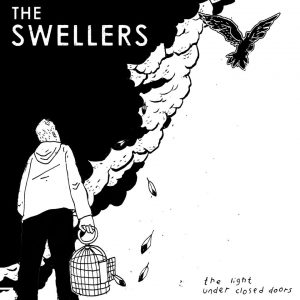 The Light Under Closed Doors

Flint, Michigan’s highly revered punk rock band The Swellers has announced they will release their fourth studio album, The Light Under Closed Doors, on October 29 via the band’s new label No Sleep Records.  Produced by The Swellers and recorded by Marc Hudson (Saves the Day, Taking Back Sunday) at Rancho Recordo in Fenton, MI and with Mark Michalik (Into It. Over It., Fireworks) in Chicago, IL, The Light Under Closed Doors is a raw collection of ten punk rock sing-alongs that are filled with driving rhythm and infectious choruses.  The band’s follow-up to 2012’s EP, Running Out Of Places To Go, strips the band down to their core with a sound that’s pure and honest.
Ghettoblaster caught up with vocalist/guitarist Nick Diener to discuss the record before The Swellers head to Brazil with Story of the Year for a handful of dates, and before returning to the U.S. for a house show tour and a small intimate album release shows in October and November (visit http://on.fb.me/11e1ecn for more information).  This is what he said about it.
When did you begin writing the material for your most recent album?

These songs started coming as soon as our last EP was recorded. We’re always writing, though, so I’m sure some old ideas were brought back to life as well. This is the first record where we actually took some time off from touring to really get the songs where we wanted them to be.

The last track, “Call It A Night”, saw many forms. At one point it had a completely different verse and pre-chorus, was slower, but it just didn’t really go anywhere. A week or so before recording the album, it finally came together and was a lot more energetic and emotionally-driven. Sometimes you just know when a song won’t work, but we held onto this one knowing it had potential. We were right!

There are a few, actually. We wrote three or four of the tracks for a side-project band Jono and I started that never really came to fruition. I think this is because we liked the songs too much to let them NOT be Swellers songs. They were in dropped-A tuning (baritone guitar tuning) and REALLY slow and heavy. The melodies still fit what we love about The Swellers, though. I’m glad we modified some things and forgot about doing a side project.

We’ve never had a guest spot on a record, except for extra background vocals here and there. Seems like bands in our world have a person or two sing a verse or a bridge on their album…and we always want to do that as well…but when it comes down to it, this is our record. It’s us in the studio. We wanna get in and get out. Our friend Aaron DeVries from Wolves & Machines came over one day and helped us out with some of the group vocals. He blends in nicely with our voices!

Who produced the record?  What input did that person have that changed the face of the record?
Technically my brother (drummer Jonathan Diener) and I produced the record. Took the songs from their original states, tweaked them for months to really cut the fat and make choruses as big as possible. Really worked with the lyrics a lot as well. We learned so much from recording at the Blasting Room in Colorado from producers Jason Livermore and Bill Stevenson. We just felt that this time, we could do it on our own. Marc Hudson and Mark Michalik both recorded our album, and they gave us a few pieces of valuable input as we tracked, so of course it wouldn’t be the same without them.

Is there an overarching concept behind your new album that ties the record together?
Unintentionally, yes. We set out to just write a bunch of songs we loved and put them on a record. Turns out, where my brother and I are in our lives are very similar, but in different ways. This allows for a really relatable record. I think people will be able to latch onto what we’re saying a lot better than they have for any of our previous records.

Not yet! Just released Track 1, “Should.” Seems people dig it so far. More than I thought they would. It’s really simple and to the point, clocking in at just over two minutes. Cool way to start off the record, we think!
(Listen to The Sweller’s new song “Should” now at MTV’s Buzzworthy Blog: http://on.mtv.com/15Iqqcc.)

Tags: No Sleep Records, The Swellers