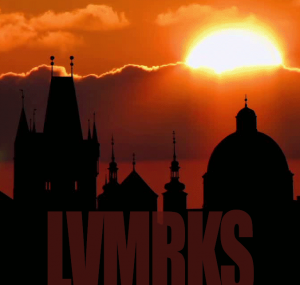 Neil Busch, former vocalist/bassist/songwriter in …And You Will Know Us By The Trail Of Dead during that band’s peak is back with a new band called LVMRKS. The group also features bassist Jonathan Hischke (Broken Bells, Hella, Dot Hacker, et al.) and drummer Dave Clifford (Red Sparowes, The VSS) alongside Busch on vocals/guitar/keyboards.
Ghettoblaster caught up with Busch and Clifford to discuss Pale Fairytale, which the band will release on their own LVMRKS Records on May 21 (available on LP and for download).  This is what they told us about it…

When did you begin writing the material for your debut album?
Neil: The bulk of new material was written during a period of struggling with life, love and $$$ last year. After years of trying on different instrumentation and song forms, these songs represent a return to a more rock ‘n roll approach.
Dave: Neil and I have been playing together in various incarnations since 2006. Originally, I played bass and he was on organ and sang with the massively talented Alan Rosetti on drums. Over the years, we’ve written a large backlog of material, much of which was shelved when I moved to drums. The songs on this album are mostly all new material, but formed out of the long process of us experimenting with sounds in order to try to find the exact musical “voice” for this band.

What was the most difficult song to take from the initial writing stage through recording and mixing?  Why was it so troublesome?
Neil: I don’t remember which one was most difficult. We did 8 songs in 2 days so, in the grand scheme, I suppose none of them were extremely hard; considering I’ve spent that amount of time just trying to get a good take of a single tune.
Dave: It was recorded pretty quickly. But, there were some challenges for me in the writing stages. Particularly trying to get the right feel for “Through Life I’ve Wandered” which was originally written with Alan on drums and changed from an organ-based song to guitar-based. Alan’s style is much different from mine, but I loved the way he played it, so I tried to follow his lead, with varying levels of success.

Which of the songs on the record is most different from your original concept for the song?
Dave: I think many of them are pretty different from how we started playing the parts in the early writing stages. One thing I really appreciate about Neil’s talents is that he’s very good at adapting melodies to different time signatures, rhythmic patterns, etc. If something doesn’t seem to be working, he’ll rework the part for a while and then bring it back, transformed into something different entirely. Sometimes it takes me a while to recognize something as a part we’d worked on in the past.
Neil: I could call it a conservation of elements but really, I think most people would call it “lazy.”

Did you have any guest musicians play or sing on the record?
Neil: I invited David Bowie but he declined the invitation.
Dave: No, but I did get to play some “guest” guitar parts on a couple of songs.

Who produced the record?  What input did that person have that changed the face of the record?
Neil: Mmm… There wasn’t a producer in the classic sense. Toshi Kasai helped flesh out our ideas and had plenty of input as well. I suppose it was co-produced by Toshi and us.
Dave: Yeah, the song arrangements were ours, but Toshi definitely helped shape the sound with his methods of recording and mixing. He’s great at presenting ideas without it seeming to overstep boundaries. I’ve recorded with Toshi several times now and it’s always a very enjoyable experience with great results.

Is there an overarching concept behind your new album that ties the record together?
Neil: If there is a concept it most likely comes from all the songs being written while going through a difficult period. I don’t know if I necessarily believe the old saying “you can only write what you know” but, this batch of songs is rooted in real experiences, and honestly, some months of deep uncertainty about where life was taking me, the band and our music.

Have you begun playing these songs live and which songs have elicited the strongest reaction from your fans?
Dave: We haven’t had the chance to play live yet since getting the band together and recording, due to all of our busy schedules. However, now that it’s coming out, we do plan to start playing live in L.A. and hopefully elsewhere in the coming months.
(Visit the band online here:
lvmrks.com
lvmrks.bandcamp.com)