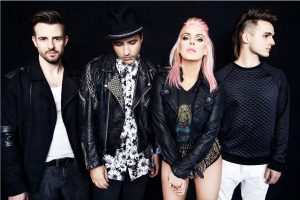 Making their veiled debut at a password-guarded basement party in early 2012, Five Knives is a Nashville band that redefines electro by merging beats with the ferocious energy of a live band. Best described as a blend of M.I.A. and Nine Inch Nails, front woman Anna Worstell, keyboardists/programmers Nathan Barlowe (who also plays guitar) and Zach Hall, and drummer Shane Wise grind heavy synth riffs into an undeniably catchy sound that’s rooted in both old-school punk and new school electronic. With their genre-bending debut EP, The Rising, Five Knives are delivering an intensified live experience and capturing a new legion of fans night after night.
Their live experience totaling just three shows, Five Knives headed to SXSW and emerged as one of the festival’s most buzzed-about bands. As their frenetic live performance fast gained notoriety, Five Knives soon went on to open up for Girl Talk, Die Antwoord, and Araab Muzik and—at the tail end of 2012—hit the road for a string of arena shows with Smashing Pumpkins.
Now working on a full-length debut, Savages, Five Knives are proud to do their part in shattering the notion that Nashville’s for country music only. For help in fine-tuning that sound, Five Knives tap into each member’s distinct background: Hall is hip-hop-obsessed, Worstell and Barlowe both worship the Ramones, and the band as a whole mines inspiration from post-punk/synth-pop pioneers like New Order and Depeche Mode.
Ghettoblaster recently caught up with Barlowe to discuss the record. This is what he said about it.
When did you begin writing the material for Savages?
About a year ago we went to LA to write a few more songs for the album. “Savages” was the first one we wrote on that trip and it was a turning point for the band. It was more pop and melodic than anything we had done before. It became the touchstone for the overall sound moving forward.
What was the most difficult song to take from the initial writing stage through recording and mixing?  Why was it so troublesome?
“Criminal” was tough. We had about four different versions. I think we were trying too hard to make the chorus huge and lift like a big pop song would. The lift actually turned out to be the instrumental drop that happens after the second chorus.
Which of the songs on the record is most different from your original concept for the song?
“Oblivion” without a doubt. We had trashed the song. It was in the “do not record” pile but for some reason I couldn’t let it die. I literally had dreams about that chorus because I knew that part was solid. One day while in the studio the band was busy working on something else and I quietly went into the other room and started over. I made a new track, wrote new lyrics, and gave the song a completely different feel. The band loved it and it made the album in the 11th hour.
Did you have any guest musicians play or sing on the record?
We had a few guest programmers. There is a DJ duo called Boom Box Cartel that are incredible and they did programming on several songs. Also two of the guys from a band called Inner Party System helped out. The singer Patrick co-wrote “Wild Ones” with us and Kris “Wuki” Barman programmed on a few tracks. Anna sang on Stevie Nicks microphone the whole time so we like to think some of her vibes made it on the recordings. Ha.
Who produced the record?  What input did that person have that changed the face of the record?
Mark Needham produced the album. He has worked with everyone from The Killers, Imagine Dragons, Bloc Party, Pink, and Neon Trees to Fleetwood Mac. The guy is a sonic genius. We have two producers in our band already so when we brought the songs to him they were written and arranged fairly close. He took those tracks that sounded pretty decent and literally made them sound bigger than we ever thought possible. He was also a big reason we didn’t tune and fix and correct every single little thing like we sometimes do. That’s a very rock-n-roll way of recording and mixing. I would say “but my guitar is out of tune,” and he’d be like “yeah, that’s why it’s fucking cool”
Is there an overarching concept behind your new album that ties the record together?
Overall I think we tried to keep it fun and have lots of party songs on the album without singing about the same old party themes like “turn your cup up” or whatever. Even our party bangers have messages in the songs for the most part. Good songs about bad relationships. Isn’t that what most records are about? Ha.
Have you begun playing these songs live and which songs have elicited the strongest reaction from your fans?
We have! “Dirty Souls” seems to go over great every night. That song is really syncopated and the rhythm seems to move people. I think the surprise stand out is a song called “I Love You To Death.” It is a complete banger on the album but when we started playing it live it was going off so hard we had to move it to the end of the set and close with it.
(Visit Five Knives here: www.FiveKnivesMusic.com.)