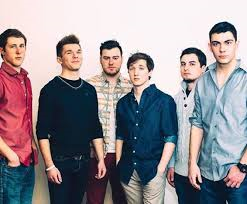 Columbus Ohio indie-dance sextet Captain Kidd has announced the release of their self-titled debut EP later this month.  Propelled by the power of the early single “Freaky Love,” the group’s EP displays their mash-up of influences including French disco, indie-pop, Spanish influenced jams and electronic music.  It’s a sound that the Cleveland Scene Magazine summed up as “Captain Kidd shows the interesting aspects of a band exploring all of what’s possible without limiting the music to a single direction too quickly.”  While AbsolutePunk compares them to no less than the sum of “Foster The People meets Arctic Monkeys and throw in some elements of Imagine Dragons.”

With the release of the debut EP this month, Captain Kidd begins their national assault.  This not only includes the completion of a video for “Freaky Love”, but a multitude of Midwest dates supporting Good Times, emcee Afroman and sharing the stage with Wiz Khalifa at Twelve Fest in Athens (confirmed tour dates below).
Ghettoblaster caught up with vocalist/guitarist Nate Baumgard to discuss the self-titled EP.  This is what he said about it.
When did you begin writing the material for your most recent EP?
May 2013.
What was the most difficult song to take from the initial writing stage through recording and mixing?  Why was it so troublesome?
“Mesmerelda”, because writing it was very tough. A lot of writers block. Once recording it, we re-wrote some melodies because it didn’t sound the way we wanted it to.
Which of the songs on the record is most different from your original concept for the song?
“Mesmerelda.” It was supposed to be a lot more ambient and a little darker. It definitely took a turn for the lighter because of the melodies and the dance segments that were added.
Did you have any guest musicians play or sing on the record?
Our producer, Nick Ingram helped with adding some extra instruments to give the songs a more “full” sound.
So Nick produced the record?  What input did he provide that changed the face of the record?
Nick Ingram and Johnny Burke. We actually recorded the first single, “Freaky Love”, over the summer and dropped it in the fall. Once it gained a ton of traction, we decided to record an EP. Since we’re down in Columbus, it made sense to find a comparable studio so we found Nick. Johnny helped a lot with writing harmonies to make them more full for “Freaky Love.” Nick was helping us explore more of a synth and electronic vibe. He definitely had a lot of input with the new songs and really helped shape them into some hits.
Is there an overarching concept behind your new album that ties the record together?
It was definitely sexually charged.
Have you begun playing these songs live and which songs have elicited the strongest reaction from your fans?
Yes. “Freaky Love” definitely gets the strongest reaction. But a lot of our fans come from a diverse background and all have different favorites.
(Listen to “Freaky Love” here:http://www.youtube.com/watch?v=Vv67kGuTFCo
Catch the band at one of these forthcoming dates:
2/15 Ohio City, OH @ Brite Winter Fest (Ohio City Market District)
2/21 Columbus, OH @Skully’s Music Diner w/ Wet Darlings
3/14 Cleveland, OH @ Beachland Ballroom
3/15 Columbus, OH @Newport Music Hall w/ Smallpools
3/18 Columbus, OH@ Skully’s Music Diner w/ Afroman
3/19 Cleveland, OH @ The Foundry w/ Afroman
3/20 Toledo, OH @ Rocketbar w/ Afroman
4/12 Athens, OH @ Twelve FEST (The Venue) w/ Wiz Khalifa)