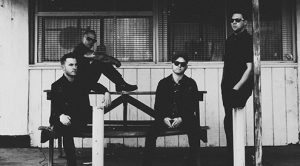 Working their way up from the dingiest of clubs and barrooms sprawling in and across North America’s borders to the stages of European festivals performing in front of thousands, Blacklist Royals have spent the last three years on the road supporting their debut full length Semper Liberi… chasing the often fleeting rock-n-roll dreams of youth like a siren song, and finding their own voice along the way.
Their long awaited follow-up album, Die Young With Me, is a testament to that. There was a very deliberate change in the writing process as twin brothers and founding members Nat and Rob Rufus entered the studio to begin going through new material with the band, and the record went on to take shape as a truly autobiographical collection of songs. Topically revolving around the personal account of a childhood spent battling cancer, the album unfolds as a fluid thing, exploring new directions both sonically and lyrically with candor and heart like never before.
Ghettoblaster caught up with Blacklist Royals’ Nat Rufus to discuss the LP.  This is what he told us…
When did you begin writing the material for your most recent LP?
The writing process began while we were still touring for the first record.  We’d recorded a few songs here and there, released a single, and done a rarities EP for a European tour, but after we stopped touring for the first album Rob and I sat down and had a ton material to work with.
What was the most difficult song to take from the initial writing stage through recording and mixing?  Why was it so troublesome?
The title track “Die Young With Me” definitely changed a lot from the demoing phase to the final version, the lyrics stayed the same but all the music ended up being totally different on the finished product.
Which of the songs on the record is most different from your original concept for the song?

The last track “Live To Shine” ended up a lot different than what I’d originally had in mind, I was thinking of doing it as a full-on band song, and it ended up not even having guitar on it ha ha, I’m stoked on how it ended up though.
Did you have any guest musicians play or sing on the record?
Greg Kuehn played keys on it, Trever Keith from Face To Face sings and plays guitar on it, Robbie Huddleston from Ann Beretta sings and plays guitar on it, the guys in Less Than Jake play horns on a song.  We had quite a few friends involved with this one.
Who produced the record?  What input did that person have that changed the face of the record?

Matt Yonker produced the album.  He also produced our first one.  He definitely helped take the songs from the demos to the finished product.  We were all on the same page about how we wanted the record to come out, but we couldn’t have pulled it off without him.
Is there an overarching concept behind your new album that ties the record together?
The new album is a concept album, so there’s a common thread running throughout the entire thing.  My twin brother/our drummer Rob was diagnosed with cancer as a teenager, and the record basically starts from that point stretches up until today, hence the title “Die Young With Me.”
Have you begun playing these songs live and which songs have elicited the strongest reaction from your fans?
We’re playing a lot of the new songs on this tour, “Die Young With Me” and “Righteous Child” have been getting good reactions from fans, in general the new songs seem to be going over really well.