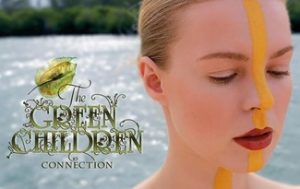 European electro-pop duo The Green Children recently announced their new full-length album, titled Connection, which is due out on July 23 and will correspond with a release show at The Roxy Theatre on July 20   where 100 percent of the show’s proceeds will be donated to The Boys and Girls Club of Santa Monica. Pretty cool, right?  Connection is the duo’s follow-up album to 2010’s Encounter, and will be available exclusively at Amoeba Records in Hollywood. Searching for inspiration for their sophomore record, Marlow Bevan and Milla Sunde returned to the woods and crystal blue lakes of Norway to bring Connection to life. The album was entirely written and produced by Bevan and Sunde.
“Feel the Light,” the first single from the new album, is currently receiving airplay on both U.S. and UK radio, and will be featured in the final credits of a major studio film in 2014. It was also featured as the title track from the group’s recently released EP, which includes “Kisses from the Sky” and “Possessed” – both tracks on the upcoming album Connection.
The Green Children will also continue their global charitable contributions via The Green Children Foundation, which supports causes like The Grameen Green Children Eye Hospital, Whole Planet Foundation, Green Children Scholarships, SOS Children’s Villages, and PAWS.
Ghettoblaster caught up with TGC’s Milla Sunde to discuss the record.  This is what she told us about it…
When did you begin writing the material for your most recent LP?
I believe we wrote our first song “Feel The Light” about two years ago.
What was the most difficult song to take from the initial writing stage through recording and mixing?  Why was it so troublesome?
In general this album was quite smooth sailing. We are very particular through every process, so we’ll never begin mixing until everything is perfect in our eyes.
We had to spend a little time getting “Kisses From The Sky” just right, mostly because of the lush string arrangement, we rarely use the same sounds so every song has it’s own perfect balance.
Which of the songs on the record is most different from your original concept for the song?
When we make music we rarely have a “concept”. We literally let things flow and see what happens without too much thought. As the production develops we definitely take unexpected turns and will sometimes replace a section several times until we get it right.
“Possessed” went through many stages. Many of our songs start with improvisation, both musically and lyrically. Much of the original first take vocal improvisation (including lyrics) ended up on the record.
Did you have any guest musicians play or sing on the record?
Actually, no.
Who produced the record?  What input did that person have that changed the face of the record?
We produced the full record, the energy we have together is just great and we have exactly the same musical vision.
Is there an overarching concept behind your new album that ties the record together?
At the beginning we didn’t set out with a concept, but to us it definitely feels like a collection that belongs together and represents where we are in life. The theme of connection has been an important issue we discuss regularly, between head and heart, humans and planet, and humankind with each other. It felt particularly fitting for the global world we live into today.
Have you begun playing these songs live and which songs have elicited the strongest reaction from your fans?
We’re just about to start playing the full album, but we have performed “Feel The Light” in past shows and it always seems to be a crowd favorite.