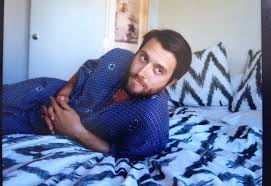 Mike Sempert is best known for his work as the songwriter and frontman of the Bay Area band Birds & Batteries. After years of recording and touring, Sempert decided to take a break from the band to focus on other aspects of life.  He got a dog, moved to Los Angeles, and married his longtime love.  Inevitably, a new collection of songs came together, many of them centered around these changes and the questions creative people often face as they stare into the oblivion of adulthood.
And so comes Mid Dream, written and recorded in Oakland and Sacramento in the months leading up to Sempert’s move to LA. The album is comprised of deeply personal songs presented in high fidelity on both an intimate and epic scale.
Ghettoblaster recently caught up with Sempert to discuss the record.  This is what he told us.
When did you begin writing the material for Mid Dream?

Mid Dream is an old side of my songwriting that’s been developing in parallel with the music I was writing for Birds & Batteries.  So over the years, I was sort of building this other thing without even realizing it.  When it was time to take a break from B&B, I decided to pursue some of these ideas and write some new songs as well.  Almost all of the songs were written in one sitting, just at different points over about a decade.
What was the most difficult song to take from the initial writing stage through recording and mixing?  Why was it so troublesome?

The song “Mid Dream” was the most challenging for me.  I wrote the bulk of it in a half-lucid, sleepy state, and like a lot of ideas that occur in that head space, they can be hard to translate in waking reality.  Once it became clear that it was actually going to be the title of the record as well, that added some pressure for the song to make sense or “work.”  So there was another phase of rewriting.  It also has a more elaborate production and orchestration than other songs on the record.  But once it was nailed down conceptually, it was smooth sailing, because I trusted Robert Cheek who mixed it and he did a wonderful job.
Which of the songs on the record is most different from your original concept for the song??

“Recovery” was originally a short, simple song, but one that has a lot of personal resonance for me.  A friend of mine was severely injured last summer and this song is inspired by he and his wife and their strength together.  Its written from his perspective to her.  It was supposed to be a stripped down, short song but the more I played it for friends, people seemed to want more.  So we jammed it out and turned it into this seven-minute epic, which feels to me like it could actually keep going!
Did you have any guest musicians play or sing on the record?

There’s some incredible musical contributions by friends on this album, namely the drum work of Colin Fahrner and voices of Sonya Cotton, Kacey Johansing and Emily Ritz as well as bass by Jill Heinke, violin by Anton Patzner and trombone by Andy Strain.? ?

Who engineered or produced the record?  What input did these people have that changed the face of the record?

I produced the album.   The engineering was split between Robert Cheek, Blake Henderson and myself.  The drums were recorded by Robert Cheek at The Hanger, which also where we mixed most of the album in the Hangar’s final moments before it relocated to Stinson Beach.  Almost all of the overdubs, including vocals were recorded by Blake Henderson of Taughtme at his home in Oakland.  His presence was hugely important to making and completing this album.
Is there an overarching concept behind your new album that ties the record together?

This album is about growing up and moving forward in life, which can be really hard to do as an artist.  I’ve always found myself pulled between two dreams, one of being an artist and a more universal “American” dream.  These two dreams don’t have to be at odds, but in 2014, it is damn hard to pull off for most of us.  So being mid-dream is really, existing between two dreams.  I’ve watched my friends struggle with these same questions.  So I knew, at the very least, that people in my creative community could relate, which gave me some confidence that this music could be valuable to others.
Have you begun playing these songs live and which songs have elicited the strongest reaction from your fans?