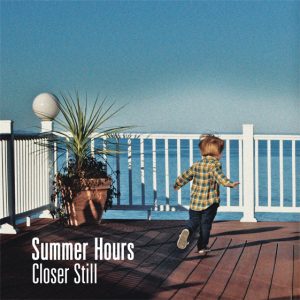 Brooklyn-based indie rock band Summer Hours’ founding members Mike Bliss (guitar) and Rachel Dannefer (vocals, bass) met at Oberlin College, birthplace of indie luminaries such as Liz Phair, Transam, Josh Ritter, The Yeah Yeah Yeahs, and The French Kicks. Initially calling themselves La Pieta, the band released its first album, Summer, on Contraphonic Records in 2000, followed by Inside Out in 2003. Griffin Richardson (drums) joined the band in 2006 while on hiatus from noise rock act Tungsten74.
In 2007, the band changed its name from La Pieta to Summer Hours and signed with Deep Elm Records. Deep Elm rereleased the band’s two previous albums along with a new album, Alone Together. Alone Together received rave reviews and shows with Of Montreal and Dressy Bessy raised their stock.  The members’ contrasting musical styles bring an element of surprise and freshness to their songwriting. Mike’s musical sensibility stems from his love of hardcore, punk, post-punk, and metal, while Rachel favors ‘80s and ‘90s pop and mellow indie-rock. Griffin brings his own perspective, mixing repetitive rhythms with a strong sense of dynamics.
Ghettoblaster caught up with guitarist Mike Bliss (MB) and drummer Griffin Richardson (GR) to discuss the bands February 5 release of Closer Still via Technical Echo.  This is what they said about the album…
When did you begin writing the material for your most recent album?

The bulk of the song writing took place between 2008 and 2011.  However, some guitar riffs were written as far back as 2001.  Generally, Rachel or I come up with a bass or guitar riff on our own. We bring the riff to practice, work on it together for a while until we hear something that resonates with us, and then work on another part of the song. In time these various pieces are fit together. Once the music is complete, Rachel records the songs and walks around with them, coming up with lyrics and melodies on the subway to work on while going for walks in the city. In general, I’d say we throw out 90 percent of the riffs introduced to practice and 50 percent of completed songs because they don’t meet our own standards.   Sometimes, like in On My Own, a song on our new album, we’ll use a riff that’s been laying around for years, just waiting for the right song to fit into. (MB)
What was the most difficult song to take from the initial writing stage through recording and mixing?  Why was it so troublesome?
You probably should ask this question to our producer, Richard Upchurch, since he had to deal with us being finicky.  From my perspective, Close and Closer was the hardest song to get a good mix on.  Because Rachel does not play traditional bass lines, it is really difficult to find the right mix between guitar and bass on our albums. (MB)
Which of the songs on the record is most different from your original concept for the song?
“These Things” was written and rewritten probably four times.  The original version is nothing like you hear on the album.  Completely different guitar lines and drum beats. (MB)
Did you have any guest musicians play or sing on the record?

Richard Upchurch, our producer, played on a lot of the songs. He’s a terrific musician and great guy.  Could not say enough wonderful things about him.  Chris Gullian played second guitar on “Brilliant Things” and “On My Own” and organ on “Blanks.”  I think his parts added a ton to those songs.  Last, but not least, Sarah Holden, played the synthesizer part on “Plastic Nametags.”  In addition to her musical chops, she’s an amazing costume designer, and makes the BEST macaroni and cheese in the world! (MB)
Who produced the record?  What input did that person have that changed the face of the record?

Richard Upchurch produced the album.  He previously recorded some songs we were commissioned to write for a documentary. He has also played live with us a few times. In terms of his input on this album, Closer Still, he drove us to record the guitar, bass, and drums live.  This required more takes than the usual overdub process, but it made for a more energetic and vivacious sounding album.  Besides playing on the songs, he also was hugely supportive and encouraging.  A great producer. (MB)
Is there an overarching concept behind your new album that ties the record together?

The only goal we have when making a record is that every song is solid. We don’t want any songs to be filler. (MB)
I don’t think that there’s a conscious decision behind any sort of “concept” or “idea” in these songs. But listening to them after the fact, it seems like a lot of these songs are concerned with the relative distance that people can feel from each other at various points in any relationship. (GR)
Have you begun playing these songs live and which songs have elicited the strongest reaction from your fans?

We’ve been playing these songs live for a while. I’d say the organ song probably has the strongest reaction from fans. (MB)