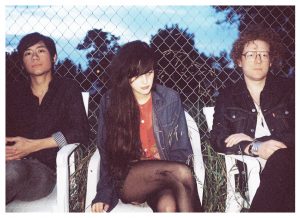 WL’s driving, spectral sound is a collaboration between singer/bassist Misty Mary, guitarist Michael Yun, and drummer Stevie Sparks.  The band formed in the lush green of Portland, Oregon, when Yun and Sparks (originally from Detroit) met Mary, a transplant from Big Sur.  The neighbors set up shop in a cement basement, and began recording their songs to tape, releasing their debut 7” last year.
WL are set to release their first full-length album, Hold, a fraying, distorted guitar and droned out bunch of compositions via cassette and digital release this July (on the 16th via Prospect & Refuge).  Ghettoblaster caught up with Yun to discuss it.  This is what he said…
When did you begin writing the material for your most recent LP?
About a year and a half or two years ago.  ‘You’re Not Really Here’ was the first song we ever worked on and most of the rest of the record represents the formative stage of the band.

What was the most difficult song to take from the initial writing stage through recording and mixing?  Why was it so troublesome?
Most of the record came pretty easily.  ‘Point of Focus’ was the last one to be completed in part because we took a circuitous route while we were writing it.  We came up with the beat first and then some dissonant chords and a melodic bass line on top of it.  That made it a pretty dense instrumental foundation.  We figured out how to give it some space with a rest in the middle that took shape when Misty came up with the backing vocal line.  After all of that we developed the melody and the lyrics to finish it up, finally adding a re-amped guitar and a delayed piano to further differentiate the beginning and end.

Which of the songs on the record is most different from your original concept for the song?
I would say perhaps ‘Point of Focus’.  Mostly because the original idea was so open, but eventually it crystallized exactly how it was supposed to I think.

Did you have any guest musicians play or sing on the record?
The three of us are the only ones on the record.

Who produced the record?  What input did that person have that changed the face of the record?
We produced it ourselves and all had significant input in the process.  In that sense, the recordings are completely true to our original intent.

Is there an overarching concept behind your new album that ties the record together?
I would say that concept is more or less stated on the cover if you can decipher it.
Have you begun playing these songs live and which songs have elicited the strongest reaction from your fans?
We toured this material while we were developing it and now we are focused on working out our next record (and material for the one after that) live.  We still work these songs into our set depending on our mood.  One of the strongest reactions that I can think of was probably to ‘It Doesn’t Matter’ when we played it live at UC Davis.  We played in a trailer classroom and when we got there we were pretty concerned we would be too loud and that no one would be able to find it.  To our surprise tons of kids showed up and it turned out to be one of the best sounding rooms of tour (the walls weren’t thick enough to hold in the sound).  When we played that song the crowd started moshing and shaking the whole thing around.  I thought someone was going to go through a wall.