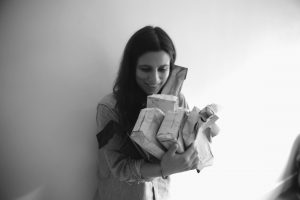 Falling Theater reflects the state of America’s pre-war movie theaters: both luxurious and decayed. Like the theaters that exist now as something different from what they once were, it presents music that has been time treated; as if our ears could hear the slow transformations and layers of patina in sounds from the past the same way our eyes see it on the walls and facades of these structures.
Matteah Baim constructed the album to be both musically seamless and lush, as well as offer unexpected elements and textures. Falling Theater was arranged by Maxim Moston of Antony and the Johnsons and features contributions from several members of the Johnsons, as well as Au Revoir Simone, MGMT, The New York Philharmonic, and The Boys and Girls Choir of Harlem. The album art was shot in the Los Angeles theater district by Lauren Dukoff, a photographer noted for her portraiture and documentary work in and out of the studio.
The third solo album from Baim, the new album features eight new Baim originals and was released on June 17 on Dream Drive Records, distributed by Kobalt Music.
Ghettoblaster recently caught up with Baim to discuss the album.  This is what was shared.
When did you begin writing the material for your most recent album?
2010.
What was the most difficult song to take from the initial writing stage through recording and mixing?  Why was it so troublesome?
It had to be” All Night.” The engineer, Eric Gorman, and I just could not find the right balance between the arrangement and the mix. No matter what we did, whether it be re-recording parts or completely changing the mix concept, outboard gear, etc, it wasn’t right. It pushed me to the proverbial edge more than once. It wasn’t until it was accidentally played back at the wrong speed that we finally heard the song as it was suppose to be! And that is what is on the record.. a slightly slowed down version.
Which of the songs on the record is most different from your original concept for the song?
The first time I heard a mix of “Blossom,” I was blown away by how the drums effected the overall song. The way the drummer, Otto Hauser, approached it was spot on but not the way I had ever imagined them. It completely caught me off guard and had an amazing effect on the whole song.
Did you have any guest musicians play or sing on the record?
Yes, I was lucky enough to work with these musicians on the record:
Antony Hegarty, James Richardson, Maxim Moston , Eric Gorman, Dave Eggar, Erika Spring, Otto Hauser, Doug Weiselman, Robert Burke, Bassy Bob, Mike Glover Jr., Alexandra Knoll, Joaquin Cotler, Marlan Barry, Saunder Jurrians, and Lindsay Dula.
What did Gorman bring that changed the face of the record?
We both have strong opinions in the studio and I think the album benefited from this back and forth kind of exchange.
Is there an overarching concept behind your new album that ties the record together?
The album reflects the state of America’s 100’s of pre-war theaters that are both luxurious and decayed.  The hope is listening to the music feels like it does walking into one of those theaters, time and gravity being the main actors in the experience.
Have you begun playing these songs live and which songs have elicited the strongest reaction from your fans?
Hoping all of them! Ha ha. We will see!
(Visit Baim here:
matteahbaim.com,
kobaltmusic.com)