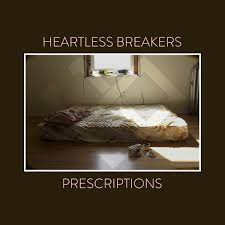 In July 2013, Heartless Breakers released their debut Prescriptions EP.  Featuring catchy riffs and melodies, and a cohesive sound, it made a great first impression for the band.  Although they’ve since announced the impending release of another, acoustic EP, titled Lighter Doses, Ghettoblaster caught up with HB’s Matt Mascarenas (ex-Daytrader) and Bryan Lee, to discuss their earlier effort.  This is what they told us about it.
When did you begin writing the material the Prescriptions EP?
Matt: We started writing “Prescriptions” in January of 2013. We had been exchanging ideas about the band and direction for a month before that while I was still living in Richmond, Virginia. We started piecing together songs night I flew into town.
What was the most difficult song to take from the initial writing stage through recording and mixing?  Why was it so troublesome?
Matt: The recording process was extremely smooth for us. We had a few different versions of each song demoed before entering the studio and had a clear vision of what we expected the final product to sound like.
Which of the songs on the record is most different from your original concept for the song?
Bryan: All of the songs turned out to be pretty different from their original iterations, honestly. Our songs are very rhythmic and tend to be based around the drums and the bass. Which is kind of strange because we almost never start writing songs with percussion or bass ideas. They almost always start with an idea on guitar. Funny how that works. It makes for an interesting writing process because just about every song turns out to take a pretty lengthy journey from where it began. What Chase feels when he’s writing lyrics or melodies over a song may be completely different from what Matt or I were feeling when we wrote the song/idea, but that doesn’t make it any less fitting. It takes a song idea that one person came up with and turns it into a shared experience. Songs changing from their original concepts is one of the coolest things about writing music with other people.
Did you have any guest musicians play or sing on the record?
Bryan: We didn’t have any guest musicians per say, but we did go about writing and recording our record in a very collaborative way. One of our best friends and HB live guitarist, Sam Richards, was with us in the studio almost the entire time helping us dial in guitar tones. We worked with two different engineers in Salt Lake City (Joel Pack and Andy Patterson) to record the EP and they both injected their own unique styles into just about every aspect of our record. We love working and collaborating with other people when it comes to our music. Pretty much every person we work with whether it’s recording, playing live, filming videos, shooting photos, etc, is a member of our band. Collaboration rules.
Is there an overarching concept behind the EP that ties the record together?
Matt:There’s not a set theme behind it. The songs tie together because we wrote around the same time. We were capturing the moment more than anything. We are still a very young band and experimenting with direction. I think doing a theme record for our first release would’ve been a bit limiting.
Have you been playing these songs live and which songs have elicited the strongest reaction from your fans?
Matt: We’ve played all these songs live. We usually play extended versions of the songs live and it’s been really exciting to see how receptive everyone has been so far.
(Read about the band’s forthcoming EP here:
http://propertyofzack.com/post/70509325964/poz-exclusive-heartless-breakers-lighter-doses-ep

See a video of “Burn and Bury” from the EP here:
http://www.youtube.com/watch?v=vRzmiPheC78
And then catch them live here: