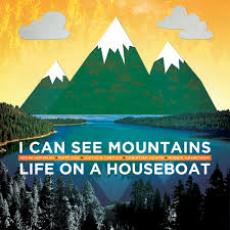 Life On A Houseboat

Buffalo, NY’s I Can See Mountains are just one band from the current crop of pop punkers who are turning the genre on its ear.  Their debut album, Life on a Houseboat, is currently in the can and debuts via Panic Records on July 2.  Taking cues from contemporaries like Transit, Tigers Jaw and The Wonder Years, these energetic youth also pay homage to staples like Saves The Day and The Get Up Kids.
Ghettoblaster caught up with ICSM’s Matt Cox to discuss the album.  This is what he said about it…
When did you begin writing the material for your most recent LP?
We began writing the record in the dead of winter of late 2011. The room we wrote the record in was surprisingly more comfortable than the building itself considering it looked more like an abandoned post office rather than a place for people to release they’re creative energy.
What was the most difficult song to take from the initial writing stage through recording and mixing?  Why was it so troublesome?
I’d have to say that “One Big Table” was the most difficult to take from a live standpoint to the recording standpoint. Originally, it was a very raw and loud song but after shedding its skin maybe three to four times, we are very happy with the finished product.
Which of the songs on the record is most different from your original concept for the song?
“Sea Legs” has to be the song that strayed away most from its original concept. The song was actually a very old, dark idea that Kevin and myself wrote after suffering through a very extended winter. Musically, and especially lyrically you can see the changes. Well, I guess that’d be obvious.
Who produced the record?  What input did that person have that changed the face of the record?
The record was recorded, produced, mixed, mastered, and supported by Jay Zubricky at GCR Audio right here in Buffalo. Not only is Jay the best recording engineer on this side of the Mississippi, but he has also been one of our closest friends. The best part about Jay is his brutal honesty, and we as a band value that immensely. He also introduced me to Chuck’s (sub shop, and also the shoes I guess).
Is there an overarching concept behind your new album that ties the record together?
Going into writing record there never was a point in time where we sat down and said “Let’s send a message with this album.”  But, I can say that we we’re all in frustrating points in life during its construction. After not listening to the songs for over a month while it was mixed and mastered, and then listening to them again almost as an outside listener, I realized in the passenger seat of my girlfriend’s car that the album was cry for help.
Have you begun playing these songs live and which songs have elicited the strongest reaction from your fans?
Yes, we’ve actually been playing these songs live throughout the entire writing process. Ideally, I feel that would not be a step that a band would take, but I feel it was beneficial to see reaction to these songs in person, almost as a test of approval. It’s been a very short time that people have been able to listen to our songs, so there hasn’t really been much of a reaction at all.