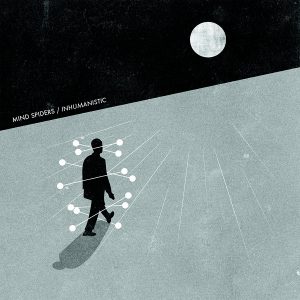 Mind Spiders are back with their third album in three years. Featuring a streamlined lineup of Mark Ryan on vox/guitar/synth, Mike Throneberry on drums, Daniel Fried on bass, Peter Salisbury on synth, Inhumanistic finds the band going in a slightly more stripped down direction than previous efforts.
The album was written while messing around with different drum machines, and while there is live drumming as well, drum machines play a prominent role as well, which is partly why the record is called Inhumanistic.  The recording is very tight, direct, and almost claustrophobic. Influences for this record include Devo’s Freedom Of Choice, Wall Of Voodoo and old horror movies (the songs Electric Things is about the movie From Beyond, for example).
Ghettoblaster recently caught up with Ryan to discuss the record, which was released on Dirt Nap Records.  This is what he told us about it.
When did you begin writing the material for your most recent album?

I wrote most of them winter 2012-2013.
What was the most difficult song to take from the initial writing stage through recording and mixing?  Why was it so troublesome?
I always demo songs to teach them to the band. One song, “Oblivion”, didn’t work when I tried to record it with the band, but listening back to the demo, I realized it was perfect as is. So, I went through a lot of work for nothing.
Which of the songs on the record is most different from your original concept for the song?
“Electric Things.” The other guys added a lot to it, making it more interesting and better.
Did you have any guest musicians play or sing on the record?
No.
Who produced the record?  What input did that person have that changed the face of the record?
I record everything. I did have some help from Jeff Burke (former band mate from the Marked Men) with mixing. He has a great ear for mixing.
Is there an overarching concept behind your new album that ties the record together?
I wouldn’t say it’s a concept record, but It’s called INHUMANISTIC for a couple reasons. Except for one song, every song uses a drum machine. I wrote all the song messing with various drum machines. The other reason is that Mind Spiders hate humans.
Have you begun playing these songs live and which songs have elicited the strongest reaction from your fans?
We don’t play live much, but I think “They Lie” works well.
(Check out the band’s “Make Make Make Make” MP3 here: http://www.dirtnaprecs.com/MakeMakeMakeMake.mp3.)