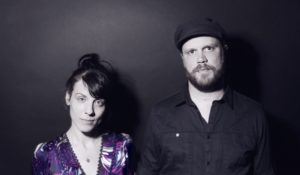 During the coldest days of January 2014, Mark Rogers & Mary Byrne recorded their debut album as a duo, I Line My Days Along Your Weight, which was released on Important Records on October 13. These two were inches apart, facing each other, intent upon listening: a true duet. Weaving together archaic sounds from baritone acoustic, tricone resonator, golden-era flattop, space-age lap steel guitar, upright piano, and hundred-year-old mandolin, the pair created a vibrant new strain of music.
Mark Rogers and Mary Byrne each grew up on opposite sides of Central Pennsylvania’s Susquehanna River, but their paths did not cross until years later in the explosively creative East Atlanta music scene. From there, the two moved to Brooklyn, where they married, and where Mary earned her MFA in writing from Brooklyn College and Mark quickly became an in-demand stage and session player and music instructor. Their collaboration began in earnest in the days after Hurricane Sandy hit New York in November 2012; with the city at a standstill, the two sketched many of the songs now included on their debut release.
Before this, Mark played with Brooklyn indie-folk band The Loom, with whom he toured and performed as part of Brooklyn Academy of Music’s “Next Wave” series and at Pop Montreal and CMJ. He also was multi-instrumentalist and songwriter with Atlanta’s renowned alt-Americana quartet, Myssouri, whose War/Love Blues was selected by Pitchfork as a top album. Mary was lead singer, songwriter, and guitarist for Atlanta trio Hot Young Priest, which toured nationwide; their Fiendish Freaky Love (Two Sheds Music) garnered critics’ praise in Magnet, Amplifier, The Big Takeover, Time Out New York, and NPR’s “All Songs Considered.”
Now Mark and Mary create a space for audiences that is most intimate, and most human, using the most elemental tools: wood, bone, steel, flesh, and voices pushing air.
Ghettoblaster recently caught up with them to discuss the debut. This is what they said about it.
When did you begin writing the material for your most recent album?
When Hurricane Sandy hit New York in November 2012, we were stuck at home for several days without transit or work, just waiting to hear when things would open up again. During those worried, oddly quiet days, we sketched many of the songs now on our album.
What was the most difficult song to take from the initial writing stage through recording and mixing?  Why was it so troublesome?
“First Fall Nights” was the first song we wrote together, and it ended up being the song most in need of an update when the recording process began. It was originally written as a mid-tempo burner with a lot of room for soloing, and was treated live as the “easy” opening number to get a feel for the sound of the room. But by the time we demoed the song for recording, it was clear that it needed to become faster and more concise. We rewrote the song so close to our studio dates that it was quite fresh when we laid it down — so fresh that our engineer, Chris Cubeta, sent us home to practice it more before doing our final take.
Did you have any guest musicians play or sing on the record?
No, we handled all the instrumentation and vocals ourselves.
Who produced the record?  What input did that person have that changed the face of the record??
We produced the record; Chris Cubeta engineered and mixed; Richard Morris mastered. The album was recorded in five days, so there wasn’t enough time for anyone to change its direction. Credit to all involved, who knew we were trying to do a live-to-tape analog recording and let it be as austere as we intended it to be.
Is there an overarching concept behind your new album that ties the record together?
We sought to record an album almost completely live, to capture as closely as possible our strengths and frailties. The process involved a lot of active listening and vulnerability. It also felt really important to capture the interwoven sound of our instruments, which could only be done by recording live takes, standing a few feet apart. These songs have their genesis in our move from Atlanta to New York and the sheer wallop that only New York can deliver — so it does seem, in hindsight, that a twinned sense of unease and exhilaration seems to run through the album.
Have you begun playing these songs live and which songs have elicited the strongest reaction from your fans?
We can only speak to our perception from the stage, but it seems that many audiences respond strongly to “Green Gold Violet,” “When Your Elders Are Tall,” and “Racing Heart.” It’s not clear to us why, but it might have something to do with the songs’ mood and unusual instrumentation.
(Visit them here: http://www.markrogersandmarybyrne.com/.)