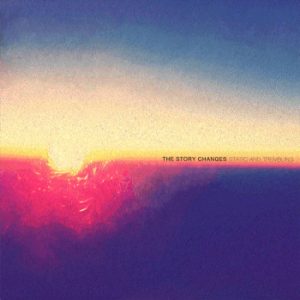 On May 21st, 2013, The Story Changes bring a welcomed sunrise to the music of the last decade, as their artwork depicts from the band’s 3rd full-length studio album, Static And Trembling. The new album revisits a better time in music, which sounds more like the greats of the ‘90s than nearly anything released in the previous ten years. The band find themselves echoing the sounds and songwriting skills of pinnacle ‘90s artists like Smashing Pumpkins, Nirvana, Shiner, and more, while still maintaining a sense of their own identity.
The 14 track album was produced and engineered by Micah Carli (of Hawthorne Heights) at Popside Studios in Troy, Ohio, mixed and additional production by Jamie Woolford (The Stereo, Punchline, Gin Blossoms), and mastered by Dan Coutant (Hostage Calm, Lemuria, Into It. Over It.) which built a comfortable setting to amplify the band’s already superlative sound.
Ghettoblaster recently caught up with vocalist/guitarist Mark McMillon to discuss the record.  This is what he said about it…
When did you begin writing the material for your most recent album?
We started the writing process a little over a year ago.  Initially a few months prior to that, we were attempting to write whenever home on short breaks between tours.  At some point we stepped back and realized that the bulk of that material sounded forced and rushed. I knew it wasn’t our best work.  We scrapped most of the ideas and made a new rule: no more heavy touring until the new album was written and recorded. Anyone that knows us or follows our band knows how much we love to tour. It was difficult to take so much time off the road, but It was absolutely what we needed to do to get this album right. We got back to the core of it all: Just being a band in a room writing music together because it’s fun.  Fast forward to a year later and I couldn’t be more proud of how the album turned out.
What was the most difficult song to take from the initial writing stage through recording and mixing?  Why was it so troublesome?
The song “Save You” was a very late addition to the album.  I wrote the song while I was in Europe the month before recording the album.  I was really excited about it and thought it could be a strong song for the album. We worked on it pretty quickly when I got home and made a rough demo of it, but it didn’t really sound good.  I heard it a certain way in my head and the demo wasn’t conveying it all.  It took a lot of playing around and adjusting the tempo to finally get it right.  I think the recording on the album turned out great!

Which of the songs on the record is most different from your original concept for the song?
“Come Clean” changed quite a bit since we first started putting it together.  That song has been around for a while and we had reworked it a few times, but it never fit with past releases.  I think it sounds great now and I’m glad we waited until this record to release it.  It fits this album perfectly.

Did you have any guest musicians play or sing on the record?
We had more friends come in and guest on this record than ever before.  JT, Matt, and Micah from Hawthorne Heights all did some backing vocals with me on various songs throughout the album.  Jamie Woolford and Kris Neises also contributed some vocals.  Our friend Joanna Taylor recorded cello and viola on the song “Nobody’s Poet.” It was a lot of fun!

Who produced the record?  What input did that person have that changed the face of the record?
Micah Carli did a great job recording and producing the album.  We knew from how things were sounding early on in the writing process that this album, moreso than any of our past releases, was heavily influenced by the late ‘90s alternative and punk music that we grew up on.  Micah really helped to steer us towards what the songs needed to achieve the sounds we were hearing in our heads, especially with the guitar tones. He really pushed us to try some things outside of our comfort zone on this album and I think it made the end result that much cooler.

Is there an overarching concept behind your new album that ties the record together?
I wouldn’t say there is a concept or storyline with the lyrics, but a reoccuring theme in the album is to just be yourself and be proud of it, no matter how different that is from the rest of society.  The real you is the best you.
Have you begun playing these songs live and which songs have elicited the strongest reaction from your fans?
We’ve played a few of them live and the reaction has been great.  People seem to have taken a liking to “State Lines” and “Never Not Ever.”  It’s a good feeling. I can’t wait for them to hear the rest of the record.
(Static And Trembling will be available on May 21st, 2013 on Vinyl/CD/Digital coordinated by I Am Shark.  The A.V. Club has featured “Hashtags And Therapists,” praising the song “Harnessing the thundering power of the Queens Of The Stone Age, “Hashtags” is a rock radio single to the max.” The album, Static And Trembling, available for pre-order now here.  Check out the song here: http://www.avclub.com/articles/listen-to-the-new-single-from-dayton-ohios-the-sto,96932/)

Tags: I Am Shark, The Story Changes