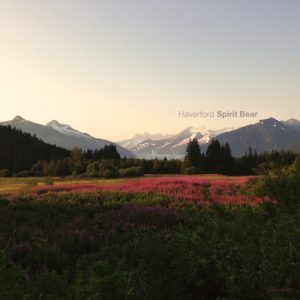 Haverford are an unsigned band from Long Island, New York, who recently released their album, Spirit Bear, a mellow emo outing that is equal parts nostalgic and electricity.  Although the band are relatively young and unsung, they’ve managed to assemble a significant list of comrades in their brief time together.  To date, Haverford have been featured on several splits and compilations alongside bands like State Lines, Captain, We’re Sinking, and Dowsing, celebrated contributors to the “emo revival”.  While the interwebs are aflutter with buzz about their comrades, the band manages to set themselves apart with their softer, more ambient approach.
Ghettoblaster recently caught up with Haverford’s Mark Masterson to discuss the full-length.  This is what he told us about it.
When did you begin writing the material for your most recent album?
We began writing for the album in November of 2012 right after Hurricane Sandy had hit, leaving us in the dark with a lot of free time.
What was the most difficult song to take from the initial writing stage through recording and mixing?  Why was it so troublesome?
“Please Just Know” probably gave us the most trouble to record as it was a somewhat loosely constructed song where we all kind of just felt things out for our parts and getting things exact was difficult so we spent a lot of time recording that song.
Which of the songs on the record is most different from your original concept for the song?
“Berth II” definitely underwent the biggest change from its initial concept because aside from some of the guitar and vocal parts the song was basically written as it was recorded.
Did you have any guest musicians play or sing on the record?
Nope, we did not.
Who produced the record?  What input did that person have that changed the face of the record?
We produced the record ourselves because we all really knew how we wanted things to sound. We all work well together, so we wanted to keep things in house.
Is there an overarching concept behind your new album that ties the record together?
The album title Spirit Bear refers to the Spirit Bear, a bear found in a small area of forest in Canada, which seems to resemble a Polar Bear as it is white in color yet it is found in the forest rather than the arctic. There is not really a concept to the album within the songs, but they all represent feelings and happenings that we feel are best represented by the idea of the Spirit Bear.
Have you begun playing these songs live and which songs have elicited the strongest reaction from your fans?
We have begun playing several of the songs but I think we have the most fun playing “Flowers” and in turn I think that causes the strongest reaction from the crowd.
(Listen to Haverford here: http://music.haverfordband.com/album/spirit-bear.)