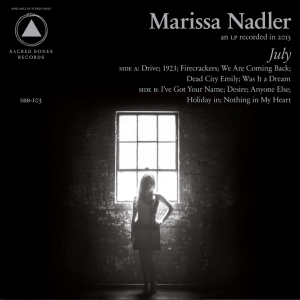 Recorded at Seattle’s Avast Studio, the sixth album from Boston-based singer Marissa Nadler, pairs her for the first time with producer Randall Dunn (Earth, Sunn O))), Wolves in the Throne Room). Dunn matches Nadler’s darkness by creating a multi-colored sonic palette that infuses new dimensions into her songs. Eyvand Kang’s strings, Steve Moore’s synths, and Phil Wandscher’s guitar lines escalate the whole affair to a panoramic level of beautiful, eerie wonder.
July follows Nadler’s critically acclaimed 2011 self-titled LP, which she released independently through a successful Kickstarter campaign, selling her own handmade albums (as well as a highly-circulated ‘Covers’ series) through Etsy. Following several albums on Kemado, her DIY venture earned her SPIN ‘Best New Artist,’ Vogue ‘Artist To Watch,’ KEXP, NPR ‘World Cafe: Next,’ and NPR ‘First Listen’ accolades, while Pitchfork gave it an “Albums of the Year: Honorable Mention.”
Recently collaborating with Angel Olsen and Xasthur, among others, July is the kind of release that reminds you why NPR counts Nadler’s songwriting as so “revered among an assortment of tastemakers.”
Ghettoblaster recently caught up with Nadler to discuss the record, which she will release via Sacred Bones on February 4 and Bella Union on February 10.
When did you begin writing the material for July?
I wrote this record in a concentrated burst, pretty much during the entirety of last year. I write best when I get into a zone where it’s literally all I do artistically is work on the songs.
What was the most difficult song to take from the initial writing stage through recording and mixing?
Not to give you a non answer but the most difficult song to write didn’t end up making the cut. It was called “leave the lights on” and I was so sure it was going to one of the best songs on the album. But, in the end, it just didn’t flow right. It had some of my favorite melodies, so I’ll have to revisit it and find out what’s wrong.
Which of the songs on July is most different from your original concept for the song?
Probably “1923”, because I didn’t know that this string section, by the incredible Eyvind Kang, would really transport this song to such an other-worldly strangeness. Thanks Eyvind!
Did you have any guest musicians play or sing on the record?
Yes, Phil Wandscher. He’s one of the best guitar players in the business, as well as an all around great personality. He’s in Jesse Sykes and the Sweet Hereafter and was also in Whiskeytown. I love his playing and I hope to work with him again. Then, there was Eyvind Kang, who I just wrote about and is awesome.
Steve Moore, synthmaster, who played the keys on the album. He plays in Earth and is a great guy who added a ton to the album. Then there was Jay Kardong on Pedal Steel who also plays with Sera Cahoone, as well as my dear friend Jonas Haskins. Jonas was also a touring bassist in Earth for a while and plays in a band Low Hums. He’s been instrumental in hooking me up with some great people and is one of my longest running collaborators through my career.
In terms of vocals, I do all the vocals and background vocals, as well as the acoustic guitar, 12 string, and electric 12 string.
Who produced the record?  What input did that person have that changed the face of the record?
Randall Dunn. Randall is the best. He’s worked with Earth, Sunn O))), Wolves In The Throne Room, and this great new band called Rose Windows, to name just a few.
Randall is known for his work with dark, heavy music, but not just that. He loves songs and I think the combination of what he likes about music and what I like – it worked really well together. He’s an absolutely wonderful person and a great guy.  He brought so much life and color to these songs.
Is there an overarching concept behind July that ties the record together?
Absolutely. I definitely conceived of this album as an album, and not just a collection of random events. I think that people will have to listen to the album to find out what that narrative is!
Have you begun playing these songs live and which songs have elicited the strongest reaction from your fans?
I honestly haven’t yet played these songs live. I have a couple tours coming up and that’s going to be the debut of the new material. I just put together this rad touring band (I needed east coast because the players on the record are all based in Seattle.) This band is all female, so I’m able to bring my harmonies to life. There’s cellist Janel Leppin (also w/ vocals and synths) and Nina Violet (steel, viola, vocals) joining me on the next shows.
(Catch Nadler on tour at one of these forthcoming dates:
2/8 – Brooklyn, NY- Glasslands w/ Zachary Cale, Amen Dunes
2/15 – Seattle, WA – Fremont Abbey w/ Shana Clevelend of La Luz
2/16 – Vancouver, BC – Electric Owl
2/17 – Portland, OR – Mississippi Studios w/Pure Bathing Culture
2/19 – San Francisco, CA – The Chapel w/ Donovan Quinn of Skygreen Leopards
2/20- Santa Cruz, CA – The Catalyst
2/21 – Los Angeles, CA – The Church on York w/ Pink Mountaintops, Sophia Knapp
2/23 – San Diego, CA – Soda Bar w/ Pink Mountaintops
3/6 – Kingston, NY- BSP Post w/ Alexander Turnquist
3/7 – Providence, RI – Columbus Theatre
3/8- Montreal- Casa del Popolo w/ TBA
3/9- Portsmouth, NH- Book and Bar
3/15- Philadelphia- Johnny Brenda’s with Mary Lattimore and Jeff Ziegler)