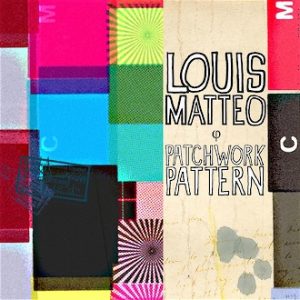 Hailing from Ohio, Louis Matteo is a multi-instrumentalist/singer/ songwriter who began picking out melodies by ear on his grandmother’s keyboard at age nine. Countless shows with teenage punk bands and high school wind ensemble concerts later, Louis made his way to Boston in 2004 to study at the Berklee College of Music.
Today, with a guitar in hand, he crafts heart-on-the-sleeve tales teeming with visceral, imagery-laden lyrics, blending the organic earth tones of the acoustic guitar, the spice of dirty electric guitar grit, the dark tint of driving bass lines, and the pulse of propulsive drum beats into a refreshing collection of indie pop/alternative rock music.  Matteo’s full-length album, Patchwork Pattern, was recorded at The Lovely Light with LA-based producer, Saul Simon MacWilliams (The Age of Rockets), and assisted by Dan Romer (Ingrid Michaelson) for Drawing Number One Productions.
Ghettoblaster caught up with Matteo to chat with him about the LP, which will be released by Neon Castle on April 30.  This is what he said about it.
When did you begin writing the material for your most recent album?
I wrote most of the songs on Patchwork Pattern within a few months at the beginning of 2011, with the exception of a few songs that I had already penned a few years earlier, which I was incorporating into set lists at live shows.  I tried out the new material on my audience to get a mirror perspective before bringing it into the studio to take it from one place to the next. The writing process was very solitary for me with some of ideas conceived while travelling, drawing inspiration in the morning during my Manhattan commute or through interactions with fans, friends, and family.  All of those memories and experiences funnel into the creative process for me, both musically and lyrically.
What was the most difficult song to take from the initial writing stage through recording and mixing?  Why was it so troublesome?
The most challenging song on Patchwork Pattern to take from initial writing stage through recording and mixing was the song “Patchwork Pattern.”  The original demo that I brought into the studio was very simple and sparse, contrasting from the fully produced version on the album. Patchwork Pattern producer, Saul Simon MacWilliams, and I spent extra time during the tracking phase to work out the vocal and instrumental harmonies on this song.  The process was not as troublesome as it was tedious.  In the end, the extra patience and time that Saul and I put into creating this song was well worth the effort.
Which of the songs on the record is most different from your original concept for the song?
The song on Patchwork Pattern that is most different from my original concept for the song was “You ‘N Me.”  The original demo was a slower ballad.  When Saul listened to the idea again months later during the tracking phase, he suggested that we transform the recorded version into a lively, upbeat song instead.  After working some of his ninja studio magic on the drums and bass parts of the track during a Saturday studio session, Saul played it back for me again on the mixing speakers and we both said let’s go with that!
Did you have any guest musicians play or sing on the record?
Yes!
Vocals, Keys, Synths, Percussion by Saul Simon MacWilliams
Drums, Percussion by Elliot Jacobson
Bass, vocals by Mike Tuccillo
Vocals by Rebecca Haviland


Who produced the record?  What input did that person have that changed the face of the record?
Saul Simon MacWilliams was the producer on Patchwork Pattern.  When I met with Saul, the question answered itself.  I instantly fell in love with the vibe – Saul’s vibe and also the musically welcoming vibe of his studio environment.  Any project that Saul accepts – and he does not produce that much – he is heavily involved.  I brought him my first EP, Confront the Congregation, and he immediately had a feel for what I was doing, conveying his enthusiasm to work with me on the new record.  I had heard some of his other work and I fell in love with the way he conducted his other projects.  Saul was very encouraging and at the same time, pushed the limits of my instrumental, vocal and lyrical songwriting ideas. He found ways to evoke new thoughts about the songs we were recording, putting a new spin on life for me, which heavily influenced the face of the record.
Is there an overarching concept behind your new album that ties the record together?
The theme of Patchwork Pattern revolves around the similar yet unique set of experiences that each person goes through in life.  Picture a person looking back on their life – what they see in their imagination is a series of events extending like a string of stones linked and soldered together along the chain of a cherished piece of jewelry that represents milestones marked along the way.  I also see all of these components pieced together in life like symbolic shapes, objects and colors, hence the concept behind the album art by Gail Marowitz. Each person has their own patchwork pattern which is their life.  Patchwork Pattern is a celebration of not only my life but of those lives that I am a part of.
Have you begun playing these songs live and which songs have elicited the strongest reaction from your fans?
Yes, the crowd favorite thus far is the song “Silk-Like-Lips” – fun to play for the band and I while the audience enjoys dancing and singing along.