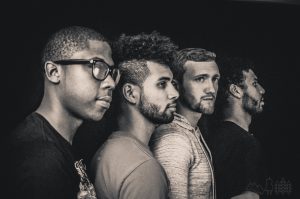 The Burgeoning’s name represents their musical M.O.; they are a fresh take on what rock means in this generation’s musical landscape. The Bensalem, Pennsylvania-based band’s never-ending pursuit of adventure and self-discovery drives their signature brand of poppy yet inventive indie rock.
The four-piece is made up of brothers Logan and Alex Thierjung on vocals and bass respectively, lead guitarist Mark Menkevich, and drummer Brandon Bradley.   Their debut EP, Love Alchemy, Life Algorithm, showcases The Burgeoning’s captivating melodies and haunting lyrics across six tracks of raw, millennial angst. Independently released in early 2014, the EP was a solid introduction to Philadelphia’s underground music scene and soon spawned a loyal #TeamBurge fan base.
The band is currently rocking crowds with their energetic live shows while prepping for a spring tour with dates to be announced.
Ghettoblaster recently caught up with Logan Thiejung to discuss the EP. This is what he told us about it.
When did you begin writing the material for Love Alchemy, Life Algorithm?
The foundations began in 2010 when we were still in high school.
What was the most difficult song to take from the initial writing stage through recording and mixing?  Why was it so troublesome?
“That Day of Yesterness.” It was difficult for Brandon, who was brand new to the band at the time, to get the non-typical 7/4 drum part perfectly. Also, the “La’s” in the song were supposed to be replaced by bells.
Which of the songs on the EP is most different from your original concept for the song?
Aside from “That Day of Yesterness,” I would say “Death of Social Networking.” The whole feel of it didn’t come out as expected. It was less edgy than envisioned…the song got mellowed out, but we rolled with it.
Why an EP, instead of doing a full length? Is there a full length in the works?
Money…and we didn’t wanna give the whole show away. There will eventually be a full length, but we believe the market we are in today begs for more single releases than album releases. So we are preparing to release a few singles first.
Do sibling rivalries ever pop up in band meetings?
Yes, fuckin’ right they do!….YOU THOUGHT THAT SHIT WAS ALL CUPCAKES AND PUPPIES, AND RAINBOWS AND SHIT!!!! GUESS AGAIN!
Yes, just as in any case in the world…you are going to eventually butt heads with your siblings, but at the same time…you have this unbreakable bond that you don’t really have with anyone else but your own blood.
Have you begun playing these songs live and which songs have elicited the strongest reaction from your fans?
Yes, of course. We’ve been playing these for quite some time now. The songs that get the best crowd response are “Lighthouse,” where we pause after the bridge and get everyone to clap together with us before we start the outro… and “I am Deaf, You are Blind,” where we start the song with my solo on the acoustic and then explode into full band complete with dramatic stops and epic guitar solos.
(Visit the band here: http://www.theburgeoning.com/.)