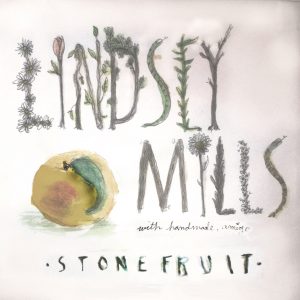 A fifth-generation Floridian, Lindsey Mills sings alternately of the swamp and the suburbs. She grew up ten minutes from the beach with jazz musician parents and a professional studio in the garage. By sixteen, Mills was playing her quirky originals on acoustic guitar at DIY punk shows. Upon graduating high school, she had recorded and self-released an LP-CD (lady lady, friends and family—2007) and an EP-CD, (Fruit n’ Feet—2008).
Mills went to college in Gainesville, FL, and began playing with a band. Though her roots are as tangled as the mangroves, her supple voice and evocative lyrics cut through to create a driving folk-pop hybrid. Her upcoming album, Stonefruit is the coalescence of three years of songwriting, and Mills’ first full-length, full-band release.
Mills has released her new album Stonefruit as a name-your-price download on Bandcamp. A physical release will follow right around FEST 12 time via Jeremy Records.
Ghettoblaster recently caught up with Mills to discuss the album.  This is what she said.

When did you begin writing the material for your most recent album?
I started writing Stonefruit during the summer of 2011 in Gainesville, FL. For the next year, I brought the acoustic bones of songs to my bandmates and they’d help me flesh out the instrumentation. The title track and “Moonhoney” were written the following summer when I moved to San Francisco.
What was the most difficult song to take from the initial writing stage through recording and mixing?  Why was it so troublesome?
“Hot Spot” was tough because it’s composed of four different parts with varying tempos and intensities. In January, I recorded my guitars and vocal tracks in my parents’ studio in south Florida, drums and bass in Gainesville. Then in February I moved to Brooklyn, where I was working with my band remotely to fill everything else in. Finally sent the whole thing to San Francisco for mixing. Sometimes the distance made conveying my ideas more difficult.
Which of the songs on the record is most different from your original concept for the song?
“Day of the Dead”. I wrote it as an elegy to my cat, and was still in mourning when I dreamt the scene the lyrics describe, so the first draft was slower and a lot more melancholy. The day my band and I jammed it, though, it morphed into the livelier version you hear on the record.
Did you have any guest musicians play or sing on the record?
The album features my dear friends and former bandmates who perform under the name Handmade, Amigo! We’ve been playing music in the same scene since we were teenagers in Jupiter, FL. The horns are all courtesy of Cassandra Wilcox and my recording engineer/stepdad Rich Switzer.
Who produced the record?  What input did that person have that changed the face of the record?
There was no official producer, but many voices contributed to the final product. My bandmates did much of the arranging. It was mixed and mastered by Roberto Pagano, a friend from my hometown whose work I’ve always loved. Without these folks, the album would have been largely acoustic, plus it’d sound a lot more lo-fi.
Is there an overarching concept behind your new album that ties the record together?
I tend to start a song with the intention of capturing a certain feeling or circumstance I’m experiencing, then I obsess about it until I feel it’s finished. So the record happened one song at a time, without much thought put into what it would eventually take shape as. But this project helped me grow a lot through a strange transitional time. I like to think of myself as a fruiting body, and it made sense to organize around that idea when some kind of pitted fruit was popping up in pretty much every song I wrote.
Have you begun playing these songs live and which songs have elicited the strongest reaction from your fans?
Yes! I got to play the songs live with my band in Florida on a few treasured occasions. While “Georgia” always gets a laugh because it’s obviously a love song for a cat, several people have also told me it brought them to tears.
(Visit Mills here:
http://lindseymills.bandcamp.com/album/stonefruit
http://jeremyrecords.limitedrun.com/)