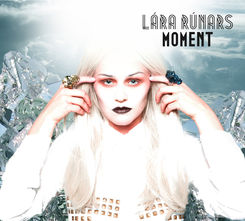 Lára Rúnars new album Moment to be released in U.S. on July 23. Already yielding three top ten singles in her home country of Iceland, Rúnars delivers a brooding yet upbeat melodic indie pop record, one she proclaims as her “darkest release” and incorporates electronics with a full band.
The daughter of Icelandic rock royalty, Rúnars father was a member of one of Iceland’s biggest bands in the 80’s, Grafík. After releasing her debut solo album, Standing Still, she connected with Irish singer/songwriter Damien Rice, which resulted in several high profile collaborations together. She is currently planning a summer tour of Iceland where she will perform new versions of old songs.
Ghettoblaster caught up with Rúnars to discuss the album.  This is what she said about it…
When did you begin writing the material for your most recent LP?
Soon after I released my album Surprise, I started writing new material, to keep momentum. Some ideas were good enough to follow through the whole process. Some were just ideas and songs that needed to be created.
Surprise was a happy album, I was going through a very bright period in my life so I didn’t have to push the pop tunes out of my system. Then came a darker period and those are the songs that followed up on Moment. Moment describes me in so many ways and the things that I went through at that time in my life. It has the whole spectrum of feelings as life is. There’s no faking. Except maybe one song where I sat down intentionally to write a pop song.
What was the most difficult song to take from the initial writing stage through recording and mixing?  Why was it so troublesome?
It’s a song called “Change” that didn’t make it to the album. We tried many versions of that song but none of them made perfect sense. I still love the song and the lyrics are very important to me so I will keep on searching for its right path. I just needed to stop trying since I was producing the album in the studio.

Which of the songs on the record is most different from your original concept for the song?
All the songs make sense to me as a part of the concept. They are all songs where I’m asking myself what and where I need to be going. Where I’m looking the devil in the eyes trying to face every part of myself. I needed to find answers and through the deep breathing I found some of them. I’m still searching and I know I always will be.

Did you have any guest musicians play or sing on the record?
No guests, just my dear band.
Who produced the record?  What input did that person have that changed the face of the record?
It’s self-produced by myself and the band. The guys in the band had the biggest impact on how everything sounds. I’m happy. We went through this process and that makes us so much stronger.

Is there an overarching concept behind your new album that ties the record together?
It’s a rebirth, kind of a change of focus, where to stay and be in this life. I was losing myself to objects and people that didn’t give me anything. It was taking the life force out of me. My breath got shallow. So I changed and rebuilt my life. Surrounded by people that I love and that give me shelter and security. It takes time and I’m still rebuilding. But I’m concentrating on each thought that are destroying and throwing it out to the open ocean.
Have you begun playing these songs live and which songs have elicited the strongest reaction from your fans?

“Heartbeat” is a great song to set the mood. I like to start off with “Beast” and “Overrated” is always a success. It’s powerful.
(Listen to the song “Beast” here: http://soundcloud.com/lararunars/beast-by-lara-runars
Watch a video teaser for Moment here: http://www.youtube.com/watch?v=o67s_TzFuYw&feature=share&list=UUPgRZCZp7Me0FYHRhBfZJgQ)