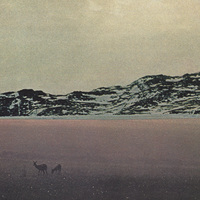 Camp Counselors is the electronic project of Cemeteries’ Kyle J. Reigle. On Huntress, Reigle trades in guitars and drums for haunting ambiance, samples and synthesizers while retaining the foggy vocals of his Cemeteries project.  Produced by Reigle and mastered by Foxes in Fiction’s Warren Hildebrand, Huntress feels naturally warm considering its synthetic atmosphere. The album was recorded over a three month period at/around Lake Ontario and was inspired by the work of John Carpenter.
Ghettoblaster recently caught up with Reigle to discuss the record, which was released by Lefse in September.  This is what he said about it.
When did you begin writing the material for your most recent album?
I started working on electronic music pretty soon after my Cemeteries album came out and I think it turned into a cohesive idea around Thanksgiving of 2012.
What was the most difficult song to take from the initial writing stage through recording and mixing?  Why was it so troublesome?
“Barren (Hounds)” was tough. I originally wrote it on an acoustic guitar so transferring that to electronic arrangements took some time. It’s also the most personal song thematically that I’ve ever written so I tried to focus on lyrics more than I ever had at that point.
Which of the songs on the record is most different from your original concept for the song?
“An Absence/Fawn”. It originally had lyrics and a chorus but I realized that the melody didn’t really fit once the instruments were all finished so I decided to release it as an instrumental.
Did you have any guest musicians play or sing on the record?
My friend Erin Fein from Psychic Twin did guest vocals on “Attean,” which was a last minute decision that I’m so glad we made. I’ve been performing that song on tour, but it’s just not the same without her singing the second verse/chorus.
Who produced the record?  What input did that person have that changed the face of the record?
I produced the record myself on an ancient laptop with some vocal engineering help from my good friend Jonathan Ioviero. Warren Hildebrand (who co-runs Orchid Tapes and makes music as Foxes in Fiction) mastered it.
Is there an overarching concept behind your new album that ties the record together?
Every song is about a specific person or people, even the instrumentals. I wouldn’t say that there’s a definite concept, but I created the album and wrote the lyrics during a personally tough winter so thematically, I think it turned out pretty cohesive. It’s a record that’s tough to explain but it’s interesting to see what people take away from it, considering they aren’t really aware of its backstory.
Have you begun playing these songs live and which songs have elicited the strongest reaction from your fans?
I’m traveling with Teen Daze right now and it’s my first real tour. The project is relatively new so it’s been interesting to hear what people think, especially fans of my Cemeteries output. Interestingly enough, people bring up the song “Barren (Hounds)” the most which is the least upbeat, but it’s an emotional song for me so knowing that it’s emotional for them as well makes everything worthwhile.
(Listen to Camp Counselors’ “Attean (Feat. Psychic Twin)”: http://lefserecords.com/tracks/CampCounselors-Attean.mp3
And see him live here:
11/3 Phoenix, AZ – Last Exit Live
11/4 San Diego, CA – Soda Bar
11/5 Los Angeles, CA – Echo
11/6 San Francisco, CA – Brick & Mortar Music Hall
11/7 Portland, OR – Holocene
11/9 Vancouver, BC – Electric Owl
11/10 Bellingham, WA – The Wild Buffalo)