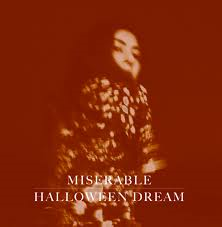 Miserable is the solo project of Kristina Esfandiari, former vocalist of Bay Area shoegazers, Whirr.  Miserable’s debut EP Halloween Dream will be released on Feb 18 via The Native Sound (John Vanderslice, Koji).
Kristina writes and performs a brand of moving and evocative music that oozes with nostalgia – and the Halloween Dream EP is no different. Over the course of four tracks, Esfandiari’s powerful voice and poignant compositions swell into soundscapes both haunting and wistful.
Building on the momentum of her Run For Cover-issued 7-inch split with PA’s Grey Zine, Halloween Dream finds Kristina experimenting with muscular riffs (“Bell Jar”) and sparse instrumentation (“Spinning”) – new territory for the songwriter, but seemingly comfortable all the same.  Miserable is now streaming a new song titled “Bell Jar” on YouTube: http://goo.gl/jsUQXQ and Soundcloud: http://goo.gl/k9c4Wz.
Ghettoblaster recently spoke with Esfandiari about the EP.  This is what she said about it.
What was the most difficult song to take from the initial writing stage through recording and mixing? Why was it so troublesome?
Actually, recording with Pat Hill went so well. I can’t really think of anything difficult. I knew exactly what I wanted going into things. If I had to say something was difficult I guess it would be getting the drums to sound right. That was a little bit tricky.
Which of the songs on the record is most different from your original concept for the song?
“Halloween Dream.” I originally wanted it to be really stripped down, but it ended up being turned into a full band thing.
Did you have any guest musicians play or sing on the record?
I only had my friends play on the album because they are not only talented musicians, but I would be too stressed and uncomfortable with strangers. Only way to go for me – there’s an energy that needs to stay sacred in such a delicate process. One bad bone can really mess that up.
Who produced the record? What input did that person have that changed the face of the record?
As I mentioned, Pat Hill. He’s very mellow and easy to work with. I can be kind of nervous while recording, so it takes a certain type of person to be able to put me at ease. He helped translate what I had in my head and made it sound even better than I imagined – it was amazing. We work well together; he’s patient, and let me do my thing. If I felt stuck at all, he would have a solution. Definitely a partner worth keeping.
Is there an overarching concept behind the songs that ties the record together?
The lyrics in this record sound very regretful, I suppose. Though, I don’t think of myself as someone who has very many regrets. “Too little, too late” is the saying I would use to describe the overall feeling on most of the tracks.
Have you begun playing these songs live and which songs have elicited the strongest reaction from your fans?
I have indeed – “Halloween Dream” is that track. It is a very emotional song, outwardly and inwardly.
(Visit Miserable here: www.facebook.com/miserablegrl.)